The team is ready to face their first, and most likely biggest challenge of the season, the Rolex 24 at Daytona.

INDIANAPOLIS- It's been a short off-season for Muscle Milk Pickett Racing and despite having only taken possession of their Nissan-powered ORECA 03 LMP2 car less than a month ago, the team is ready to face their first, and most likely biggest challenge of the season, the Rolex 24 at Daytona.

Not every sporting series starts their season with their main event, but such is the case for the TUDOR United SportsCar Championship and unlike some of their competitors in the new combined Series, Pickett Racing has not had the opportunity to put in many miles of testing prior to the start of the season.

The Greg Pickett-led team took part in the Roar before the Rolex 24 pre-season test session at the beginning of the month and used it as a shakedown test with their new car turning its first laps. 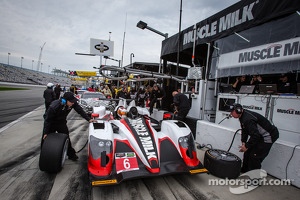 It's with only a little over 800 miles of running under their belt that the Muscle Milk squad will be making their Rolex 24 debut next week. However, that isn't stopping the team from being up for the challenge.

The crew has been hard at work preparing the #6 Muscle Milk ORECA/Nissan the last couple of weeks and the team will make the most of the four hours of practice time available to them ahead of the green flag on Saturday, January 25.

Once again, Nissan driver Alex Brundle will be joining Muscle Milk Pickett Racing's regular, full-season drivers, Klaus Graf and Lucas Luhr for this season-opening event. The Brit co-drove with the German pair at the Roar test earlier this month.

While all three drivers have experience with 24-hour races at places such as Le Mans, Spa and the Nurburgring, this will be both Graf and Brundle's first Rolex 24 at Daytona. Luhr, however, has a class win and a couple of second place overall finishes at Daytona on his resume.

With a new car, new tires, new track, new race length and new competitors, Pickett Racing will be facing many 'new' challenges next week in Daytona Beach, but if there's one thing the team has proven over the past few years it's that they are ready and willing to face whatever is put in front of them.

Klaus Graf, driver Muscle Milk Pickett Racing: "Going into the Rolex 24 at Daytona, we have to set our mind on the distance of the race, since the car is still pretty new we're still working a lot on speed and getting the optimum set up on our Muscle Milk ORECA/Nissan, but at the race you very early on have to think about what you need to do going into it to make the full distance, that's going to be very critical.

"With this many cars (67 entries), success will come by staying trouble free and making no mistakes and that's what we have to wrap our head around very early on in the race week."

"We had a good test a couple of weeks ago and the car was reliable. It's a long race and the key will be to stay out of trouble.

"It's going to be a challenge. The car is still relatively new to us and while we learned a lot about our Muscle Milk ORECA/Nissan at the test, there are still things to learn and work on, which is a normal part of the process of having a new car.

"And there's no better place to keep learning than during a race!"

Alex Brundle, driver Muscle Milk Pickett Racing: "It's going to be a challenge. With the amount of red flags we saw during the test days, we can see that staying out of trouble is going to be at the forefront of everybody's mind.

"Taking that first and foremost, I think the reliability of the Muscle Milk ORECA/Nissan has been good throughout the test and the performance of our guys has been good in terms of mechanically dealing with the car so I think we're in good shape for the race."