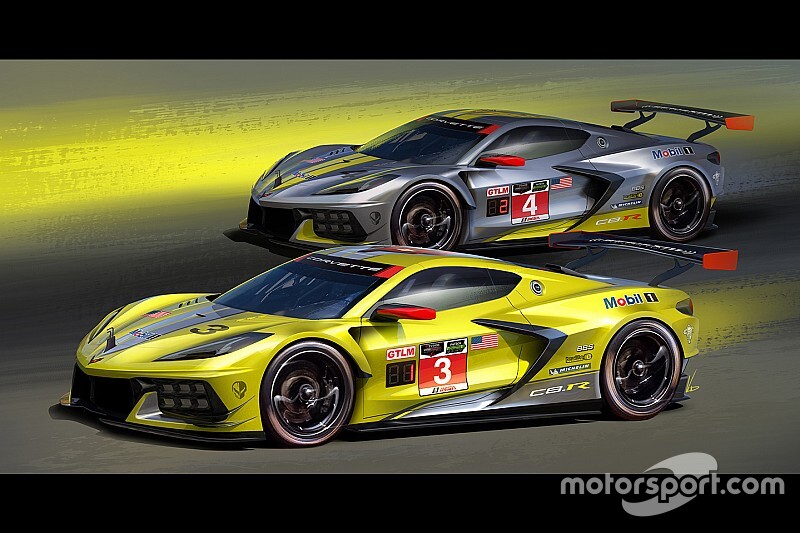 The Corvette C8.R was officially revealed today at Road Atlanta, ahead of the C7.R’s works-backed IMSA swansong in this weekend’s Petit Le Mans.

The new mid-engined C8.R will be Chevrolet’s first mid-engined racecar to compete in IMSA’s GT Le Mans class and the marque is describing the svelte machine as its “first clean-sheet racecar design since the C5.R debuted in 1999.”

Said to share a higher percentage of parts between the production car and racecar than its predecessors, the C8.R will make its racing debut in next January’s Rolex 24 at Daytona, the opening round of the 2020 IMSA WeatherTech SportsCar Championship.

Ed Piatek, Corvette chief engineer, declared: “It was important for us to develop the new racecar alongside the production car, so that each product could properly take advantage of the new architecture. The benefits of this mid-engine supercar, including its incredible balance and connected-to-the-road feel, will be obvious on the street and the track.”

The C8.R will continue to use a 5.5-liter naturally aspirated V8 engine, and in compliance to IMSA rules, it will be restricted to 500hp and 480lbft torque. A new compact Xtrac 6-speed sequential gearbox has been developed to provide room at the rear of the C8.R for a racecar-specific diffuser.

Changes from the road-going version of the C8 include the R-model using the front storage compartment to contain a single centrally-mounted radiator, while extra-bright headlights are situated where the production car’s radiators are located.

“We have looked forward to racing a production-based mid-engined Corvette for a long time,” said Jim Campbell, Chevrolet U.S. VP of performance and motorsports. “The debut of the C8.R is the result of immense collaboration between GM Engineering, Propulsion, Design and the Corvette Racing team.

“As Corvette Racing enters its third decade of competition, we’re excited to begin the next chapter.”

The C8.R utilizes a production 2020 Stingray chassis structure produced in the Bowling Green Assembly plant. The chassis is then modified to meet race series requirements. The new C8.R chassis structure is said to be “significantly stiffer and lighter” than its predecessor “with a lower center of gravity and more even weight distribution on the wheels.

The two C8.Rs will ride on 18 inch Michelin Pilot Sport GT tires, and for the first time the two cars will run significantly different liveries. The #3 will run the team’s classic yellow color scheme with silver accents, while the #4 will be in silver – “inspired by the color of iconic Corvette concepts such as the 1973 Chevrolet Aerovette and the 1959 Corvette Stingray Racer” – and with yellow accents.

Mobil 1, Michelin and Sirius XM will remain partners with the team.

The C8.R will perform a demo lap prior to the start of Saturday’s Motul Petit Le Mans.