SEBRING, FL – Nissan-powered Prototypes showed they are going to be a force to be reckoned within the TUDOR United SportsCar Championship after demonstrating race leading pace during last weekend’s 12 Hours of Sebring.

Six-time ALMS champion Lucas Luhr had a strong opening stint in the Muscle Milk Pickett Racing Oreca in the first couple of hours, moving up from as low as tenth to as high as second. 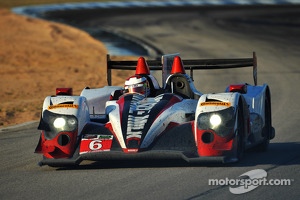 Swift pit work by the Muscle Milk crew pushed the Nissan-powered prototype past two Daytona Prototype machines on the second round of pit stops into the race lead.

Klaus Graf built a 19 second lead in the third hour of the race but was forced to serve a penalty for pit-lane speeding after the next stop.

Nissan GT Academy winner Jann Mardenborough climbed aboard next but the team developed a driveline issue after the young star’s first stint and was forced back to the paddock for repairs.

Within 40 minutes the issue was repaired and the GT Academy graduate was back on track. Sadly, the team had lost 13 laps to the leaders in the process.

The team continued for a further four hours before power steering issues forced the car into retirement.

"It wasn't the result we wanted but it is what it is. Thank you to the boys, they worked very hard and they got our Muscle Milk Oreca Nissan back out after our problem with the driveline. They were really quick to get it fixed," Klaus Graf said.

"We did competitive laps and we led the race by 19 seconds at one point. It shows that we had the speed. We also had very good pit stops. It's just that the car is still new, new to Sebring, new to the U.S. and we still have to learn a lot of things together with ORECA.”

Mardenborough will now turn his attention to the upcoming GP3 season but is keen to return to Sebring.

"It wasn't the start that I wished to have for my first time racing in America but it's been a great experience driving for Muscle Milk Pickett Racing," Mardenbourgh said.

"The last week and a half I've been out here in Sebring testing and racing with them and I've learned a lot. I've made some great friends within the team and I've had the chance to work with two really professional drivers. I've definitely come out a better driver and a more experienced one. I'll know what to expect next time if I get to come back here at Sebring and have another crack at it.

The Nissan-powered Oak Racing again showed strong form at Sebring with Olivier Pla qualifying the Morgan chassis on the front row of the grid.

Joined by Gustavo Yacaman and Alex Brundle, the trio remained in contention for much of the day and ran as high as second. On the final restart with nine prototypes on the lead lap, Pla challenged strongly and tried to pull off a move around race runner-up Ryan Dalziel but was baulked in traffic by a GT car.

The Pla brought the Morgan-Nissan home in fourth place.

“The key was to survive traffic and stay on the lead lap. On the last restart, I was trying to fight for positions and pass Dalziel," Pla said.

“However, I had to lift because of a GT car and I lost positions. I was right there to fight at the end, but came up a little short at getting the job done. Anyway, we did our best and we are gong to work hard for Long Beach because I think there is something to do there.”

The next race for the Muscle Milk Pickett Racing and Oak Racing squads will be the Grand Prix of Long Beach on April 12. After two of the longest races in the championship at the Rolex 24 and 12 Hours of Sebring, Long Beach will be a 100 minute sprint.