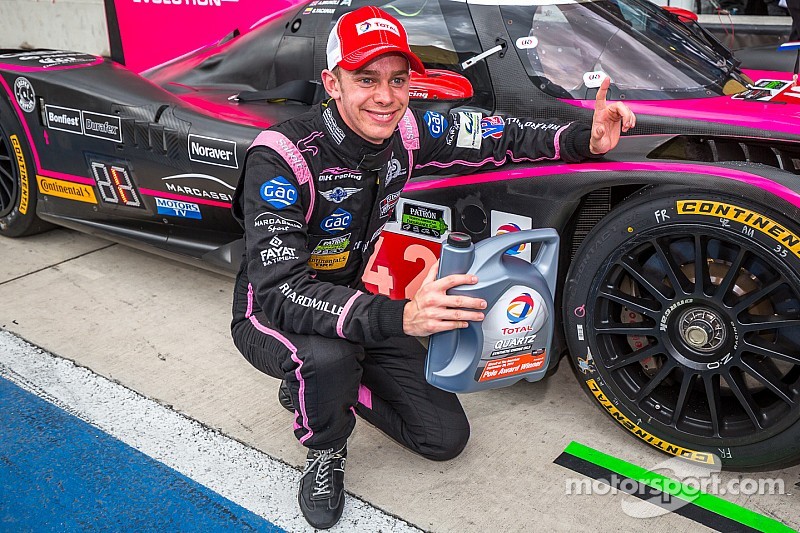 OAK Racing skipped the “shakedown phase” for its new No. 42 Ligier JS P2/Honda in the TUDOR United SportsCar Championship.

Driving the team’s new car in its first American outing, Alex Brundle took the TOTAL Pole Award in qualifying on Friday for Saturday’s Lone Star Le Mans at Circuit of The Americas.

We knew the machine was good ... We’ve done enough miles in it (in Europe)

The second-generation British driver turned a lap of one minute, 57.809 seconds (103.897 mph) on the twisty 3.40-mile circuit to take his second TOTAL Pole Award of the season, and third for the French team. Brundle won the pole at Watkins Glen International, while co-driver Gustavo Yacaman took TOTAL Pole Award honors at Canadian Tire Motorsport Park, both in a Nissan-powered Morgan chassis.

“We knew the machine was good – we’ve done enough miles in it (in Europe) – it was a case of bringing it here with a new (Continental) tire and a new motor,” Brundle said. “It all worked out, and it’s a credit for the guys for adopting so quickly with it. I raced a Ligier at Le Mans – but it had a Nissan engine in the back. So I’ve done a few miles in it, but when you change engines, you’ve got to adapt to it again. I’m amazed at how quickly any issues were ironed out.”

The Lone Star Le Mans takes the green flag at 12:35 p.m. ET and will be televised live on FOX Sports 2. A two-hour telecast also will air on FOX network on Sunday around NFL programming. Check local listings.

“The guys have done an amazing job,” said Yacaman. “This car is just amazing, and there’s a lot more to come from it. The engine has been flawless, and we have been able to adjust a lot of things on it to make it driver friendly.”

Ricky Taylor will start from the outside of the front row, running a lap of 1:58.643 (103.167 mph) in the No. 10 Konica Minolta Corvette DP he shares with his brother Jordan. Memo Rojas took third in the No. 01 Telcel Chip Ganassi Racing with Felix Sabates Ford EcoBoost/Riley co-driven by Scott Pruett, followed by Prototype points leader Christian Fittipaldi in the No. 5 Action Express Racing Corvette DP. Fittipaldi co-drives with Joao Barbosa.

It was either ‘go big or go home,’ and it paid off

Rayhall – who scored his first TUDOR Championship victory in the most recent race at Virginia International Raceway with co-driver Luis Diaz – said the team gambled on its qualifying setup.

“We made a wholesale change,” Rayhall said. “It was either ‘go big or go home,’ and it paid off. With the change we were going to qualify either first or fifth. I’m really happy to make it two poles in a row for (team owner) Enzo (Potolicchio) and everyone on at 8Star.”

Colin Braun was second, running 2:01.085 (101.086 mph) in the No. 54 CORE autosport ORECA FLM09. Braun and co-drive Jon Bennett can clinch the PC driver championship with a second-place finish or better on Saturday.

Bruno Junqueira was third with a lap of 2:01.260 (100.940 mph) in the No. 09 RSR Racing Linospresso USA ORECA FLM09. Renger van der Zande – running second in the PC standings – was fifth in the No. 8 Starworks Motorsport Martini ORECA, one position behind teammate John Martin in the team’s No. 7 Under Armour/Bomberg entry shared by Martin Fuentes and Alex Popow.

The PC session was red-flagged after one lap when David Ostella tagged a barrier in the No. 38 Performance Tech Motorsports ORECA FLM09. Moments after the session resumed, Jack Hawksworth – one of the fastest competitors in practice – lost drive and pulled off course in the No. 08 RSR Racing in the No. 08 entry.

Bomarito turned a lap of 2:03.539 (99.078 mph) in the No. 93 SRT Motorsports Dodge Viper SRT GTS-R, which turned out to be the pole winning time after the pole-winning No. 910 Porsche North America Porsche 911 RSR driven by Patrick Pilet had its qualifying times disallowed as the roof of the car was missing a required camera pod.

“We were pretty close to pole, we were right there within a couple tenths, and now we have it after the Porsche didn’t make it through tech,” said Bomarito, who joins co-driver Kuno Wittmer (Canadian Tire Motorsport Park) in winning poles this season. The pair combined to give the team its first TUDOR Championship victory at Road America.

“More importantly, we’ve got a real good race car. We need to maximize our points, and staring first puts us in an even better position. We need to leave this weekend with another chunk of points and go to Petit Le Mans (powered by Mazda) and fight for the championship.”

Porsche to start alongside

TRG-AMR came to Circuit of The Americas looking to turn around a recent string of misfortunate that has seen the team earn consecutive poles in the GT Daytona (GTD) class, but not yet finish on the podium.

Looking to reverse that trend in Saturday’s Lone Star Le Mans, the No. 007 CarryOn.com/The B+ Foundation Aston Martin Vantage will start in a familiar position with James Davison extending his streak to three straight TOTAL Pole Awards in TUDOR Championship qualifying.

From here, we just need to have a good race day

“From here, we just need to have a good race day,” said Davison, who will be joined in the Lone Star Le Mans by co-driver Al Carter. “Believe it or not we haven’t finished on the podium once, for whatever reason or another. We’ve got a lot of key pit people from Aston Martin here this weekend. It’d be a great time to shine on race day. Really proud of the whole team, we’ll do our homework tonight to have a good race car.”

With just two races remaining on the TUDOR Championship schedule, the GTD class features a three-team, three-manufacturer, five-driver tie atop the standings. Dane Cameron was the highest qualifying driver among the teams tied for the points lead, driving the No. 300 Turner Motorsport BMW Z4 to third with a lap of 2:08.826 (95.012 mph). Cameron will join co-driver Markus Palttala in the car that is specially numbered this weekend honoring Turner Motorsport’s 300th professional race with BMW.

Milner ready for the challenge of running both races this weekend