Peter Sachs drove his first actual race at Silverstone (England) in 1960 in a Turner 950 and continued racing until 2007.

DAYTONA BEACH, Fla.- Peter Sachs, a retired successful SCCA, IMSA, USRRC and vintage racer, received the 2013 Bob Akin Award from the Road Racing Drivers Club at a dinner prior to the running of the Rolex 24 At Daytona, the season opener of the 2014 TUDOR SportsCar Championship. 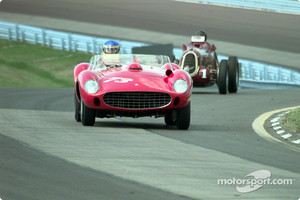 Each recipient of this honor, considered the top award in motorsports for amateur, vintage/historic or semi-professional drivers, is selected by Akin's son Bobby, RRDC members Brian Redman and Archie Urciuoli, and approved by RRDC president Bobby Rahal.

The distinctive trophy was conceived by the RRDC in 2003 to honor the memory of longtime RRDC member and past president Bob Akin, who lost his life in a racing accident in 2002.

The trophy was designed by Steuben Glass in Corning, N.Y., and is given to a driver who best exemplifies the extraordinary qualities and characteristics that Akin represented, including a passion for motorsports and automobiles, a high level of sportsmanship and fair play, and who has contributed to the sport of motor racing.

Sachs' racing career has spanned more than four decades. Today he manages the Klemantaski Collection, one of the world’s largest archives of motorsports photography.

Born in 1939 in New York City, Sachs has lived most of his life in Stamford, Conn. He graduated from Harvard College and later received an MBA from New York University. While at college he got involved in automotive competition, starting by competing against Skip Barber, another Harvard alumnus, in parking-lot gymkhanas.

He drove his first actual race at Silverstone (England) in 1960 in a Turner 950 and continued racing until 2007. In 1963 he was the SCCA national champion in F Modified, driving a Lotus 23. He won an SCCA divisional title in 1964 with a Brabham BT5, setting a lap record at Lime Rock Park (Conn.). Sachs also raced in IMSA Firehawk, Grand-Am Cup and vintage series.

For some years he was in the automobile business in the Boston area and then spent 37 years as an investment banker at Goldman, Sachs & Co.

He has been retired, from both work and racing, for several years.

Sachs was presented the award by Urciuoli, Akin and Rahal. "Bob Akin was regrettably lost to us a little more than 11 years ago," said Urciuoli. "Those who knew Bob knew that he was a hell of a guy, a hell of a businessman, a hell of a racer. His Bob Akin Motorsports was a mainstay in historic racing and he did a lot for the sport in general. He was a great raconteur and authored many articles about motorsports and the like.

"We're pleased to present this award to Peter Sachs, a longtime member of the RRDC," added Urciuoli. "He raced early on in gymkhanas, then got hooked up with some guy named Skip Barber while they were in school together. He competed in England in a Turner at places such as Silverstone and Brands Hatch and eventually got involved in the British Saloon Car championship in a Chevy II, winning several races against competitors like Graham Hill, Roy Salvadori, Jack Sears and Mike Parkes."

"I am overcome by this," said Sachs. "About 56 years ago when I was a freshman in college before I started gymkhanas as a kid, one summer I went to see some friends in the Midwest and we drove up to this place called Elkhart Lake (Wis.) to see the SCCA June Sprints. In those days when you went to Elkhart Lake the big teams took over car dealerships or gas stations. Charlie Hughes had a brand new Ferrari Testa Rosa that Danny Collins was going to drive, and the Cunningham team was there with Alfred Momo. Walt Hansgen would drive one Lister and Ed Crawford would drive the other, and they finished one-two on Sunday.

"I got into the Cunningham garage and there was a helmet on the bench and I said to one of the kids working for Momo, 'What's that?' 'That's Mr. Hansgen's helmet, don't touch it,' he replied. I was not about to touch Walt Hansgen's helmet, but on the front of it was this symbol that a lot of us are wearing on our lapels tonight. 'What's that emblem on the front of his helmet?' I asked. And he said, 'That's the Road Racing Drivers Club and only the best drivers in the country can join that.'

"And I said to myself, Gee, I love motor racing, and if I could do some of this, I thought maybe some day, somehow, I could be part of that organization. And to receive this award tonight, in the name of my friend Bob Akin, is more important to me than you can imagine.

"I hope in the years to come I'm still doing the things which make me a worthy recipient of this award and to live up to the challenge in the future."