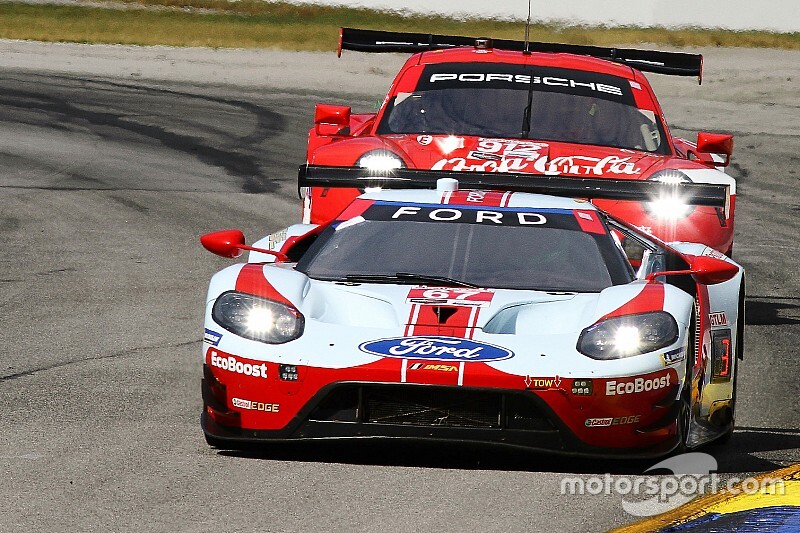 Despite a pit entry miscue for Felipe Nasr in the dominant #31 Action Express Cadillac, he is now getting back on strategy in the Motul Petit Le Mans at Road Atlanta, although teammate Joao Barbosa leads, and Ganassi’s Ford GTs run 1-2 in the 2019 IMSA WeatherTech SportsCar Championship finale.

Just past the 2hr30min mark, the second full-course caution of the race flew after Wayne Taylor Racing’s Max Vaxiviere pushed Aaron Telitz’s GTD Lexus off the track hard enough for it to make contact with the wall and park with a broken front suspension. Pipo Derani just missed the entrance into pitlane when Race Control declared the pits open and so kept the dominant #31 Action Express Racing Cadillac DPi-V.R out on track, as the rest filed in led by Mike Conway in the second AXR machine. Out of the pits Tristan Nunez in the #77 Mazda was ahead of the #6 Acura ARX-05 now piloted by Indy 500 winner Simon Pagenaud.

Tristan Vautier’s JDC Miller Motorsports Cadillac now led the similar cars of Will Owen (Juncos Racing) and Vaxiviere. Graham Rahal guesting in the #7 Acura ran eighth. A misfire and therefore long stop for the #55 Mazda had dropped it a lap down in 10th and he was ultimately taken back behind the wall.

Derani would pit a few laps after the restart and emerge in eighth, while Owen passed Pagenaud’s Acura for third. Derani would cycle back to the front when the others stopped, before stopping again at 3h30m mark to hand back to Nasr. That was just after Juncos’ fine run would end as Owen brought the #50 Cadillac trickling back and behind the wall.

Rahal drove an excellent stint to recover the time lost by Castroneves’ drive-through penalty, and then passed Pagenaud for third. The #6 Acura would then fall behind the recently stopped #31 Cadillac of Nasr, as would the #7, before Nasr hit the front as the other frontrunners made their scheduled stops. Just past the four-hour mark, Nasr made his seventh stop and was able to emerge third.

The Ford GTs of Dirk Muller and Ryan Briscoe continued leading after the second full course caution with James Calado third in the polesitting Risi Competizione Ferrari 488. Behind them ran Jan Magnussen’s Corvette C7.R until the restart when Connor De Phillippi’s BMW M8 passed him for fourth. Nick Tandy in the #911 Porsche led Tommy Milner in the second Corvette and Earl Bamber in Porsche #912, but a couple of laps after the restart Milner outbraked Tandy to grab sixth.

However, on a different pitstop strategy, Tandy would get back to the front before pitting 90sec ahead of the four-hour mark. That left Scott Dixon in the #67 Ford five seconds ahead of teammate Muller who was working hard to fend off Alessandro Pier Guidi’s in the Ferrari. In fourth was Tom Blomqvist’s BMW leading the Corvette C7.Rs both piloted by their enduro extras – Mike Rockenfeller in #3 and Marcel Fassler in #4 –  and the two Porsche 911s of Bamber and Tandy.

Both Christopher Mies in the Montaplast by Land Audi R8 and Fraga would serve drive-through penalties for carving up the Scuderia Corsa in braking zones, but it didn’t appear to cost them much as they remained very close on track. However, Riley Motorsports got Ben Keating out ahead of Scuderia Corsa’s Cooper MacNeil in the stops that occurred just past the four-hour mark.

At that point, Robby Foley in the Turner BMW led Marco Seefried’s PMR Lambo, with Justin Marks up to third for MSR, Mies ran fourth ahead of Katherine Legge in the Heinricher MSR carand Scott Hargrove in the Pfaff Porsche.