Petit Le Mans: A long day's journey into night, and then some 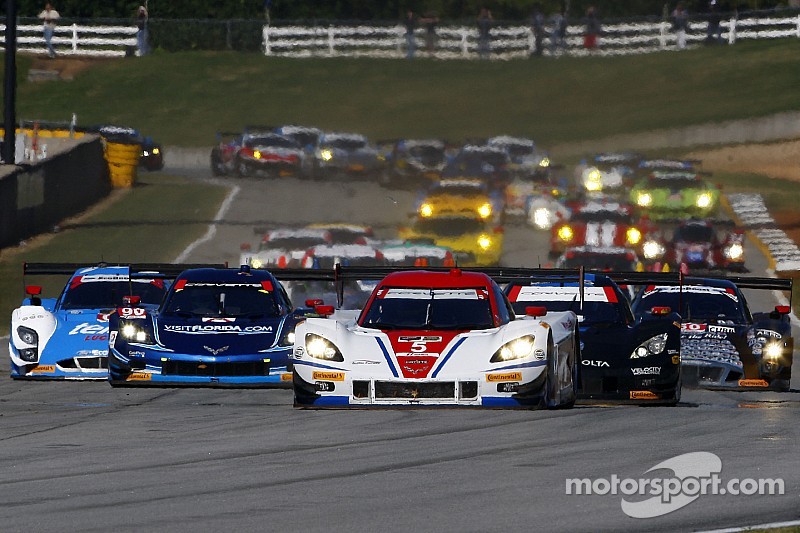 Fewer than four hours to go at Petit Le Mans at Road Atlanta, and the temperature is beginning to cool enough to pull out the jacket or sweatshirt. Aside from a few security people who seem to be trained by the Third Reich, this is maybe the most pleasant Petit in years – from the stands, at least.

In the pits and paddock – there are no garages here – it’s a tense place. A stunning number of teams are in a wait-and-see mode about next year; except for GT Le Mans, the teams who are absolutely certain they will be back in 2015 and will tell you so you can count on two hands. Maybe three. The issues are sponsorship, uncertainty about the future regulations, end-of-the year burnout, end-of-the-seaon drained bank accounts, annoyance at the Balance of Performance assignments, and the appeal of a more global series (World Endurance Championship), or a cheaper one (Pirelli World Challenge and Continental Tire Challenge).

This is not unusual, and not unexpected, but the complaints are louder than usual. Last year, there was a great deal of hope about the merger of the American Le Mans Series and Grand-Am, but – to the possibly-unfair dismay of some teams – the merger did not solve every problem sports car racing in America has.

But this race: So far, so good, as far as sheer action. There was the weird pit-lane crash when Jan Magnussen looked down to adjust his belts in the number 3 Chevrolet Corvette when he hit the back of the number 911 Porsche, and collected the number 62 Ferrari 458 Italia, causing a West Coast journalist to remark: “No big deal -- I saw a crash between a Ferrari, a Corvette and a Porsche in Beverly Hills just a few weeks ago.”

The poor number 7 Mazda Prototype, which crashed yesterday, lasted less than an hour – overheating. Actor Patrick Dempsey’s Porsche is out, as is the number 9 Action Express car that crashed yesterday with the number 07 Mazda. Ben Keating’s number 33 GTD Viper, which won at Circuit of the Americas, crashed and has retired. The very fast number 42 OAK Ligier/Honda is out, after having problems all day, which actually started at qualifying last night. Ten cars have retired, probably 10 are limping, and the other 30 seem in pretty good shape.

The biggest surprise: After a shunt with the number 42, the DeltaWing replaced the nose, and it’s back out there n fourth, with Katharine Legge driving.

The good news, for the team, at least: The number 5 Action Express Corvette wrapped up the Prototype championship just by starting the race, and Christian Fittipaldi and Joao Barbosa won the drivers’ championship as soon as they each completed a stint. And, with 3 hours and 28 minutes to go, that car is leading.

But that could change. We’d be surprised if it doesn’t. (It just did: Scott Pruett is now leading in the Ganassi Ford-Riley. Stay tuned.)