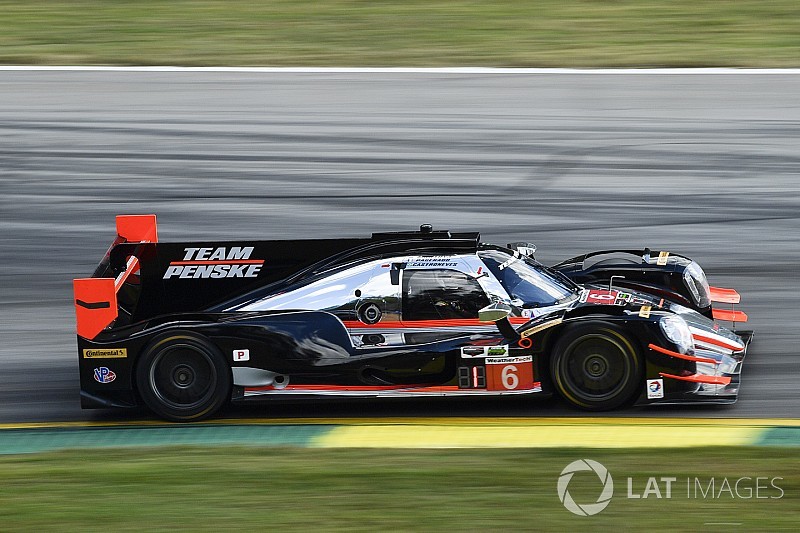 Helio Castroneves took Penske’s Oreca-Gibson under the 72sec barrier around Road Atlanta to claim fastest time in the fourth and final practice before this afternoon’s qualifying session.

The three-time Indy 500 winner, who becomes a fulltime IMSA WeatherTech SportsCar Championship driver in 2018 in a Penske-Acura ARX-05, lapped the 2.54-mile roadcourse in 1min11.968sec to edge the ESM Nissans of Brendon Hartley and Pipo Derani by just 0.023sec and 0.051sec respectively.

Renger van der Zande was fourth fastest in the Visit Florida Racing Ligier, just 0.063sec off the pace, while Ricky Taylor was fastest of the Cadillac drivers in fifth, albeit 0.4sec off Castroneves.

Rebellion Racing’s Oreca, in the hands of Mathias Beche, was sixth ahead of the Action Express Racing Cadillacs of Christian Fittipaldi and Mike Conway.

In GT Le Mans, Toni Vilander put the Risi Competizione Ferrari into P1, a mere 0.02sec faster than the #3 Corvette C7.R which will be shared this weekend by Jan Magnussen, Antonio Garcia and Mike Rockenfeller. Martin Tomczuk was third in the Rahal Letterman Lanigan Racing BMW M6, ahead of the #4 Corvette, in which Marcel Fasller will be “third man” alongside Oliver Gavin and Tommy Milner.

Joey Hand was top Ford GT driver in fourth, ahead of Bill Auberlen in the second BMW M6, with the two Porsche 911 RSRs in seventh and eighth.

Connor De Phillippi has been consistently quick throughout practice, and in FP4 he put the Land Motorsport Audi R8 at the very top of the GT Daytona class, albeit by just 0.07sec, ahead of Matteo Cressoni who’ll be sharing the Scuderia Corsa Ferrari 488 with regulars Alessandro Balzan and Christina Nielsen.

Sage Karam was third in the #14 Lexus RC F of 3GT Racing, with Andy Lally fourth in the faster of the two Acura NSXs run by Michael Shank Racing. Trent Hindman was fifth in the Paul Miller Racing Lamborghini Huracan, with Jesse Krohn sixth in Turner Motorsports’ BMW M6.