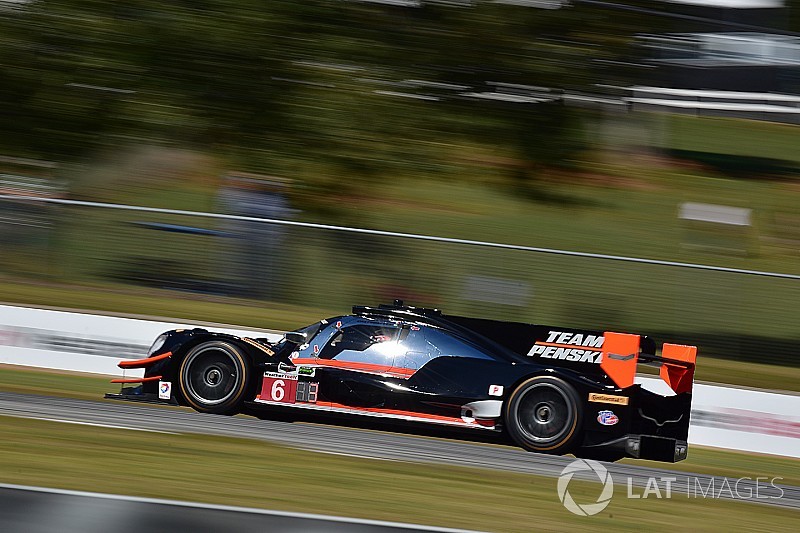 Helio Castroneves took six laps to nail a Petit Le Mans pole time that remained tantalizingly out of reach for ESM Nissan, which threw everything it had into displacing the #6 Penske-run Oreca-Gibson.

Castroneves worked down to a 1min11.314sec to beat the ESM Nissans of Pipo Derani and Brendon Hartley by 0.161sec and 0.185sec respectively.

Mathias Beche was fourth in the Rebellion Oreca, 0.309sec behind, with Renger van der Zande fifth in the Visit Florida Racing Ligier, 0.620sec off the top spot. Olivier Pla made it two Ligiers on the third row, slotting the PR1/Mathiasen Motorsports entry into sixth.

Of the Cadillacs, Ricky Taylor was fastest but down in seventh, with Christian Fittipaldi and Eric Curran ninth and tenth for Action Express Racing, 1.1 and 1.7sec off the top respectively. Eighth went to Misha Goikhberg in the JDC/Miller Motorsports Oreca.

James French put Performance Tech Motorsports on pole by a handy margin of 1.175sec over Garett Grist’s BAR1 Motorsports entry and 1.559sec over Don Yount in the second BAR1 machine. French’s time was 1min16.069sec, set on his seventh of eight laps.

A shockingly close session ended with Toni Vilander scoring Risi Competizione’s second straight pole but the first five in the field covered by less than a tenth of a second.

Tommy Milner was sixth in the #4 Corvette, ahead of the second BMW driven by Martin Tomczyk, and the disappointing Porsche 911 RSRs of Gianmaria Bruni and Patrick Pilet which were respectively 0.5 and 0.75 off Vilander’s pole time.

Matteo Cressoni made it two Ferrari on class poles when he put the Scuderia Corsa 488 at the front of the class, on a weekend where he plays third man for the squad’s regular drivers Christina Nielsen and Alessandro Balzan. Lapping the course in 1min20.661sec, he edged Andy Lally by 0.078sec, who made a small error on his final flying lap in the #93 Acura NSX.

However, that was enough to beat Jack Hawksworth’s Lexus RC F, Sheldon van der Linde in the Land Motorsport Audi R8 and Jesse Krohn in the Turner Motorsport BMW M6.

Michael Christensen had the fastest Porsche 911 GT3R, but his Alegra Motorsport entry was sixth yet still only 0.3sec off the class’s ultimate pace. Ozz Negri was seventh in the second Acura ahead of Change Racing’s Lamborghini Huracan piloted by Jeroen Mul, the second Lexus of Sage Karam and Andrew Davis in the Stevenson Motorsport Audi R8.

Hayden won’t ‘give Miller a kiss’ after Phillip Island clash