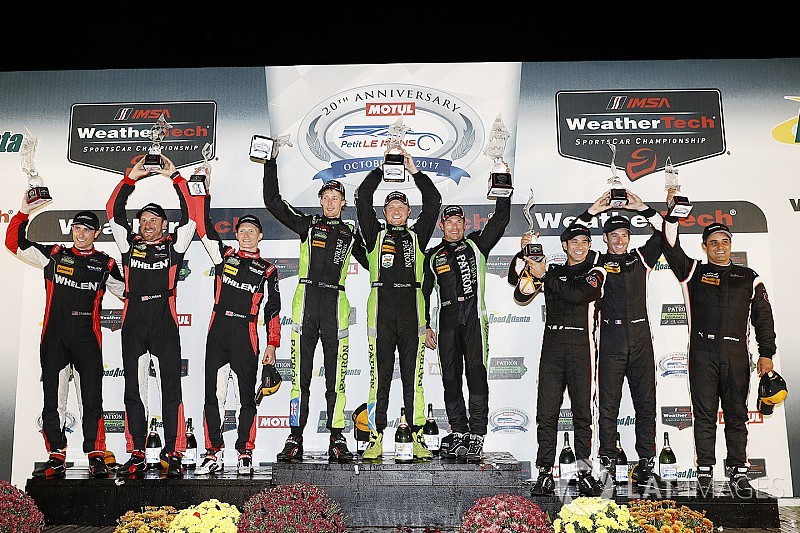 Brendon Hartley, Ryan Dalziel and Scott Sharp won the 20th Petit Le Mans, but only after their ESM Nissan teammates and an Action Express Racing Cadillac were served penalties in the final half hour.

Pipo Derani in the #22 ESM Nissan was adjudged to blame for sending Ryan Briscoe’s Ford GT off course while holding the lead and received a drive-through penalty.

Meanwhile, Filipe Albuquerque in the #5 AXR Cadillac was issued a stop-and-hold penalty for ushering teammate Dane Cameron off the track during the final restart. He then had to serve another drive-through penalty for responding too late to the one before.

Derani and Albuquerque were left in a mortified fourth and fifth respectively.

Thus Cameron, Eric Curran and Mike Conway took second in the #31 AXR Cadillac, 7.6sec behind Hartley and less than half a second ahead of Cameron’s 2018 team partner, Juan Pablo Montoya.

A clash with Jack Hawksworth ‘s GTD Lexus broke a wheel on the Penske-run Oreca Gibson with around 90 minutes to go but Montoya charged hard to recover, following a similarly stellar stint from IndyCar teammate Helio Castroneves.

Visit Florida Racing pitted and quit in the closing stages when Renger van der Zande noticed the Ligier's engine was about to let go. The #85 JDC Miller Oreca thus came home in sixth.

In GT Le Mans, there was a thrilling battle to the flag between Alexander Sims’ BMW and Antonio Garcia’s #3 Corvette, in which SIms took the honours on the M6 GTLM's swan song.

Briscoe couldn’t be part of the fight following his clash with Derani, nor could Risi Competizione after Giancarlo Fisichella got a pitlane speeding penalty.

Fisichella’s partner Toni Vilander finished 16sec behind Garcia in third, with Tommy Milner fourth in the #4 Corvette, just ahead of the two works Porsche 911 RSRs.

In GT Daytona, Land Motorsport took charge of the race in the final three hours and Connor de Phillippi, Christopher Mies and Sheldon van der Linde were not to be denied.

They finished an impressive 15.5sec ahead of the Alegra Porsche of Daniel Morad, Michael Christensen and Michael Quesada, while Jorg Bergmeister, Patrick Lindsey and Matt McMurry made it two Porsches in the top three.

Jeroen Bleekemolen brought the #33 Mercedes of Riley Motorsports home fourth ahead of the CORE autosport Porsche and the Alex Job Racing Audi.