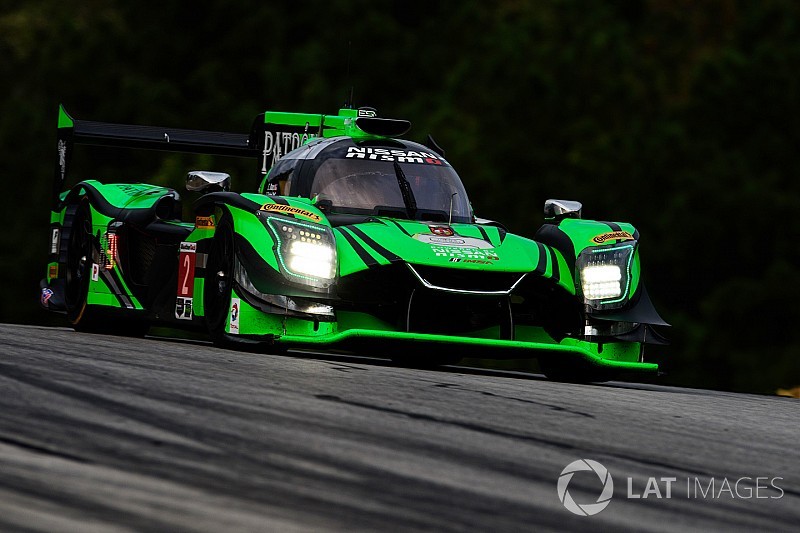 The ESM Racing Nissans ran 1-2 after the opening couple hours of the IMSA WeatherTech SportsCar finale at Road Atlanta, as Penske’s Petit Le Mans challenge came unstuck thanks to an errant backmarker.

On a damp but drying track, the Penske Oreca-Gibson of polesitter Helio Castroneves led Pipo Derani from the start chased by Brendon Hartley, but Derani moved the #22 ESM Nissan into the lead before the end of the opening lap, with Mathias Beche running fourth for Rebellion Racing ahead of the Ligiers of Renger van der Zande (Visit Florida Racing) and Olivier Pla (PR1 Mathiasen Motorsports).

On Lap 8, the change from wets to slicks began, and after the stops, Castroneves continued in second between the Nissans. However, on Lap 12 out came the full-course yellow as Matteo Cressoni in the Scuderia Corsa Ferrari had hit the wet grass, hit the brakes, and hit the Penske car, sending himself and Castroneves into the gravel trap at the end of the back straight.

Amazingly, after he was towed out and returned to the pits for a new Oreca rear end, Helio had lost only a lap.

The restart saw Nissan easily hold onto its 1-2, chased by Van der Zande, and the two Action Express Cadillacs split by Pla, although the Frenchman moved past Eric Curran’s #31 Caddy two laps later to take fourth.

Curran pitted on Lap 36 and the Wayne Taylor Racing Cadillac did likewise on Lap 38, van der Zande on Lap 39, Derani on 41, Hartley on 42.

Derani handed over to Bruno Senna but the #22 came out second, 1.3sec behind the its sister car, now driven by Ryan Dalziel, the pair of them barely more than 2sec clear of van der Zande’s Ligier. Taylor muscled past Curran for fourth on Lap 47.

A second fullcourse yellow occurred when Kenny Habul’s GTD-class Mercedes AMG GT went off track and collected two WeatherTech signboards and dropped them on the track.

At the restart the ESM Nissans pulled away once more, but it took very little time for the third yellow to fly. Jose Gutierrez, running fourth in the PR1/Mathiasen Ligier, ran wide over a curb at Turn 5 and launched over the gravel trap to land on top of the tire wall.

That promoted the WTR Cadillac into fourth ahead of Beche’s Rebellion Oreca, and Curran in the #31 AXR Cadillac.

At the end of the first two hours, Castroneves in the Penske Oreca ran ninth and remained a lap down, having not yet caught a lucky yellow.

The next round of Prototype pitstops had just begun as the race reached the two-hour mark.

In the damp, Toni Vilander’s Ferrari 488 of Risi Competizione was clearly holding up Antonio Garcia’s Corvette and Bill Auberlen’s BMW M6 and on Lap 4, the C7.R moved to the front, and Vilander started backing Auberlen into the clutches of Joey Hand in the #66 Ford and Martin Tomczyk in the second Bimmer. Auberlen then moved past the Ferrari into second, but on Lap 7 he, Vilander and Tomczyk all pitted for slick tires.

Following the stops, the Corvettes of Garcia and Tommy Milner ran first and third, split by Vilander, with the BMWs fourth and fifth and Hand’s Ford in sixth. However, at the restart following the first yellow flag, Milner moved into second to create a Corvette 1-2, and Auberlen soon put his BMW ahead of Vilander’s Ferrari. In fact his charge continued, and soon the #25 BMW was into second and chasing Garcia hard for the class lead.

The other driver to watch in the early stages was Richard Westbrook. Having had his #67 Ford GT sent to the back of the whole field for illegal ride-height in qualifying, he passed a GTLM car – Patrick Pilet’s Porsche 911 RSR – for the first time by Lap 30 to move into eighth, and started closing in on Gianmaria Bruni’s 911.

When the GTLM class pitted under yellow, Bruni’s car caught fire, and crew members had to spring into action to quickly douse the flames. Inevitably, Bruni was late returning to the track, having gotten out while the fire was extinguished.

Auberlen had pitted just before the second yellow and so the #25 RLL-run BMW took the lead for the restart and escaped from the Corvettes which ran second and fourth, split by Hand’s Ford, as this trio got bottled up behind a PC car. Auberlen’s advantage was wiped out by the third full-course yellow.

At the restart, Milner was punted into a spin by Westbrook’s Ford, allowing Pilet and the Risi Ferrari – now driven by Giancarlo Fisichella – to demote the #4 Corvette to seventh.

Andy Lally wasted no time in moving his Acura NSX past Matteo Cressoni’s Scuderia Corsa Ferrari to grab the GT Daytona lead, with Sheldon van der Linde third in the Land Motorsport Audi and Sage Karam fourth in the top Lexus RC F. The other Lexus of Jack Hawksworth was the first to stop for slicks, and Karam followed suit on Lap 5.

Once everyone had stopped, Lally was out front, with Karam holding off Jesse Krohn in the Turner Motorsport BMW M6, Andrew Davis in the Stevenson Motorsport Audi R8 and the similar Audi of van der Linde. This long battle eventually saw the Land Motorsport car slip ahead of the Stevenson machine on Lap 47.

That was the same lap that Lally pitted the leading NSX for a routine stop. Following the second restart, Lally had his mirrors full of Hawksworth’s Lexus, with Ian James’ similar RC F in third, but separated from the leaders by a couple of GTLM cars.

Following the third yellow, James was having to work hard to keep Justin Marks (Turner BMW) behind him.