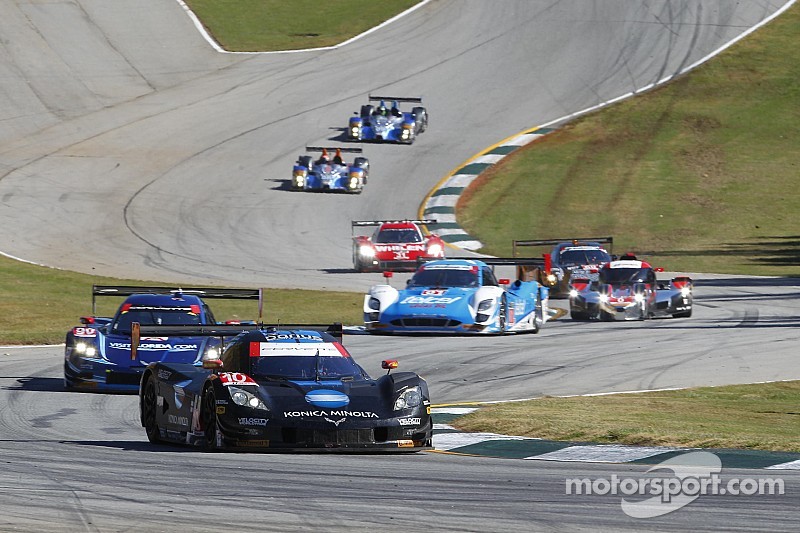 The race has been action packed thus far.

The No. 10 Wayne Taylor Racing Corvette DP currently leads Petit Le Mans. The first caution of the race came after just 13 minutes when Eric Lux spun and stopped in his 8Star machine.

By starting the race, the No. 5 Action Express Corvette clinched the Team's championship. Both Joao Barbosa and Christian Fittipaldi clinched the driver's title as well.

Early mechanical dramas put the Oak Racing Ligier multiple laps behind. They worked their way back up to seventh, but contact with the DeltaWing sent the car flying off into the tire barrier outside of turn one.

The No. 9 Action Express Corvette ended qualifying stuffed in the door of the SpeedSource Mazda. Today wasn't much better. They retired after contact with the No. 33 GTD Viper. The aforementioned Mazda is also out of the race due to engine issues. The No. 88 BAR 1 Motorsports entry went back to the garage after making contact with a barrier as well.

No. 31 Marsh Racing Corvette DP stalled in the second hour momentarily before getting back going again, but it did bring out a full-course yellow. Power steering issues dropped the No. 09 PC down the order, which was running second at the time of the issue.

The Spirit of Daytona DP is in serious trouble too, which we will get to in a moment...

During the fourth full-course caution, a very bizarre incident took place on pit road. One driver looked down at his belts for a moment and when he looked up, chaos ensued. The No. 4 Corvette, No. 911, and No. 62 Ferrari were all involved.

During the ninth caution, the Spirit of Daytona car got clobbered by the Flying Lizard entry as they went down into turn nine, causing major suspension damage to the No. 90. Mike Rockenfeller was furious and understandably so.

Caution #6 - No. 88 BAR1 PC makes contact with barriers at the third corner.

Caution #7 -  No. 38 Performance Tech Motorsports PC stops on track on the exit of turn seven.

Caution #9 - No. 33 SRT Viper GTD crashes on the exit of turn seven, nearly flipping due to the odd angle.

Caution #10 - No. 42 Oak Racing P1 crashes into barrier following contact with the DeltaWing.

There have been ten retirements thus far.