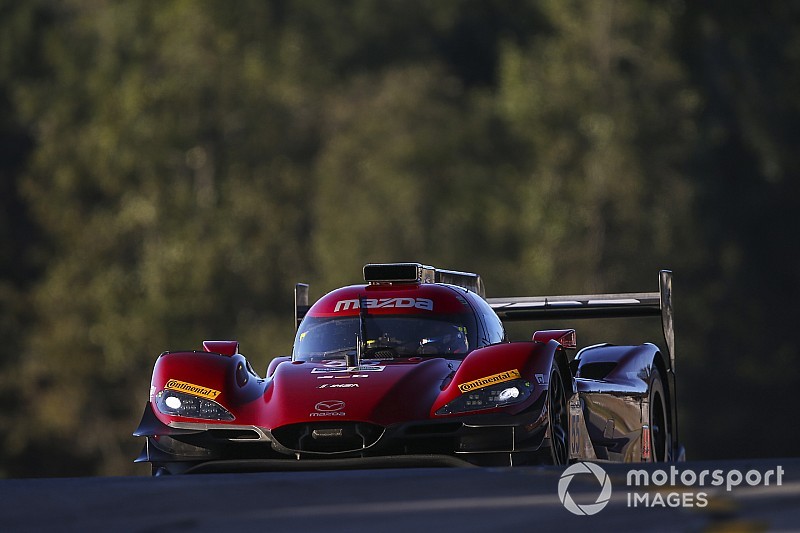 ESM Nissan’s Pipo Derani initially held on to his pole-winning advantage at the start of the 2018 IMSA WeatherTech SportsCar championship finale, staving off the Mazdas, but picked up a right-rear puncture.

Derani was holding a lead of just two seconds over Jonathan Bomarito and Oliver Jarvis in the battling Mazda RT24-Ps, as they picked their way through GT traffic. From the start of the race, all three cars were almost immediately under Derani’s previous lap record.

But 25 minutes in, Derani got a puncture and a slow half-lap saw him emerge from his unscheduled pitstop in 14th, last of the Prototypes.

Behind the Mazdas, the Acura Team Penske ARX-05s of Ricky Taylor and Juan Pablo Montoya were split by Simon Trummer’s JDC Miller Motorsports Oreca, with the Action Express Racing Cadillacs chased by the second ESM Nissan of Norman Nato.

In GT Le Mans, polesitter John Edwards swiftly lost out to championship leader Antonio Garcia in the #3 Corvette C7.R and Earl Bamber’s #912 Porsche 911 RSR so the BMW M8 ran third. Behind was Richard Westbrook in the #67 Ford GT chased by Tommy Milner in the second Corvette and Patrick Pilet in the second Porsche.