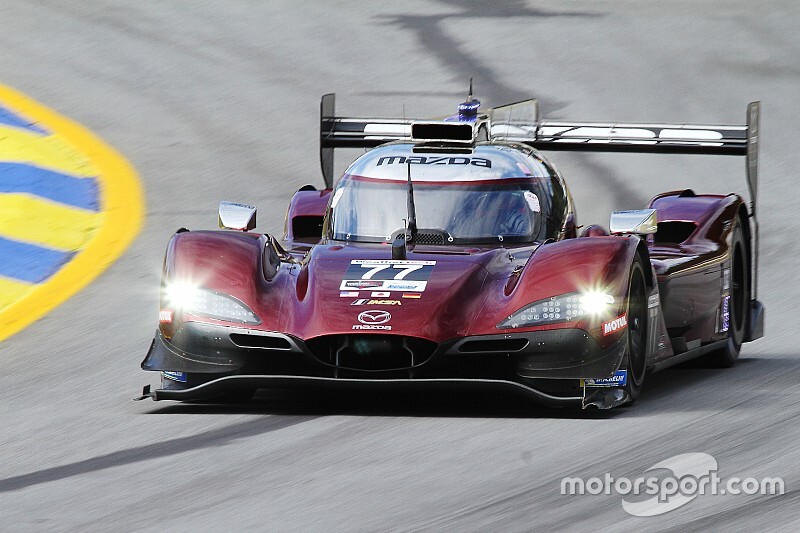 The third caution period of the race, caused by an off for a GTLM car, came right after Joao Barbosa pitted the leading #5 Action Express Racing Cadillac DPi-V.R that had been hunted down by Timo Bernhard’s #77 Mazda, which just made it into pitlane before it closed. Nasr handed over to Eric Curran, who resumed in third ahead of the two Acura Team Penskes ARX-05s of Dane Cameron and Graham Rahal, while Jordan Taylor now drove the #10 Wayne Taylor Racing Cadillac. Cameron would soon dispense with Curran and move into third.

Bernhard grabbed the lead from Barbosa, who rather unnecessarily then bumped the Porsche 911 of Fred Makowiecki, before the two DPis pitted.

However an earlier stop by Cameron to hand over to Simon Pagenaud saw the Frenchman hit the front in the #6 Acura into the lead ahead of the #77 Mazda, now driven by Oliver Jarvis, with Barbosa third, Curran fourth, Taylor fifth and Helio Castroneves sixth in the #7 Acura.

By the six-hour mark, Derani recovered the lap lost caused by Curran pitting early, but remained behind Pagenaud who ran 10sec in arrears of leader Jarvis in the #77 Mazda and 3sec behind Filipe Albuquerque in the #5 AXR Caddy. Fifth was Van der Zande in the Wayne Taylor Racing Cadillac, just about holding off Castroneves.

After running 1-2, Scott Dixon ahead of Dirk Muller, the Chip Ganassi Racing team were dismayed just past the 4h30m mark to to see Muller drop the #66 into the gravel at Turn 1, quite unassisted, bringing out the full course caution. The car was towed back to the pits and resumed but Joey Hand/Muller enduro partner Sebastien Bourdais was now eighth and two laps down. That left Dixon leading Daniel Serra in the Risi Competizione Ferrari 488, Tom Blomqvist’s BMW M8, Mathieu Jaminet in the #912 Porsche 911 RSR, Mike Rockenfeller’s #3 Corvette C7.R, Frederic Makowiecki piloting the #911 Porsche and Marcel Fassler in the #4 Corvette.

By the six hour mark, Dixon was back in the lead of the class but his nearest competitor was Colton Herta in the #25 BMW M8 ahead of Serra’s Ferrari, with Jaminet and Pilet fourth and fifth for Porsche, and the Corvettes sixth and seventh.

Just before the six-hour mark, Lewis was virtually forced off the road by Barbosa – there was no contact, but he had to steer to avoid the AXR Cadillac and tripped through the grass.