The #6 Muscle Milk ORECA/Nissan was the quickest of the P2 cars in class with 10 Daytona Prototypes ahead of them.

Daytona Beach, Florida (January 23, 2014) - Muscle Milk Pickett Racing will be making their debut at the Rolex 24 at Daytona from the 11th spot on the grid when the green flag falls on the 2014 season Saturday afternoon.

No one knew quite what to expect in this year's first qualifying session of the TUDOR United SportsCar Championship season, but as many had predicted the Daytona Prototypes did out-qualify the P2 cars in the Prototype Class. 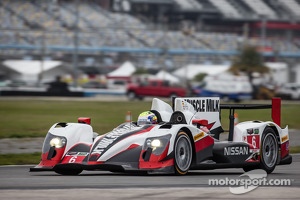 The #6 Muscle Milk ORECA/Nissan was the quickest of the P2 cars in class with 10 Daytona Prototypes ahead of them.

German Lucas Luhr, who has a class victory at Daytona International Speedway in 2001 and a couple of second overall finishes, was in charge of qualifying duties for the Muscle Milk team.

Despite the gap, the team came out satisfied with the their performance and the improvements they've made since the test.

Lucas Luhr, driver Muscle Milk Pickett Racing: "It was the first qualifying of the year, the good thing is that we are by quite a bit the fastest of the P2 cars. The thing is that the DPs are just too quick for us at the moment. I think they have to have a second thought on the balance of performance, especially on a high-speed track like we have here and later in the year at Road America.

"In regards to our performance, our car was good. We made a lot of improvements since the test today. We did the best we could, therefore I'm happy with our performance at Muscle Milk Pickett Racing, and in relation to the others, that's not really in our hands."