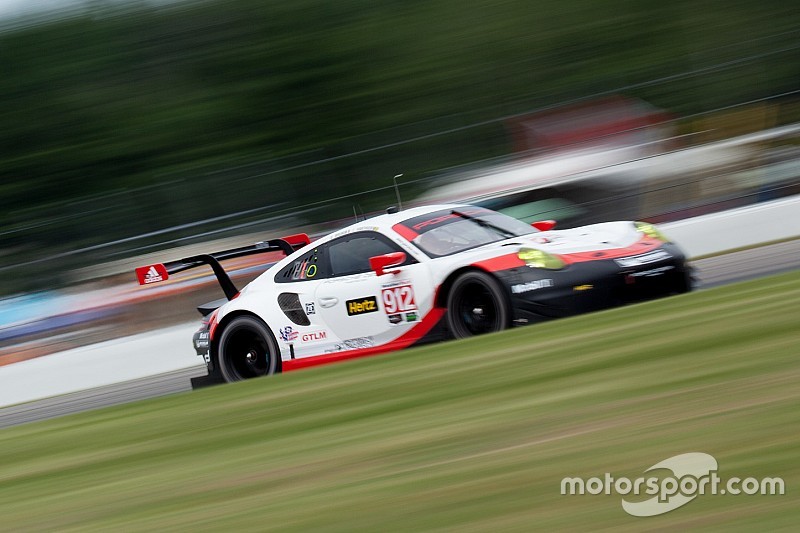 Porsche’s Gianmaria Bruni will start from pole position for round eight of the IMSA WeatherTech Sportscar Championship at Lime Rock Park.

In the first of two GT-only rounds of the series, Bruni set the fastest time in the premiere GTLM division to take his first pole for Porsche in his third outing with the squad after his switch from Ferrari.

Ford’s Richard Westbrook had grabbed pole on a 50.540s lap with just under five minutes remaining, before Bruni snatched it back by 0.136s with a 50.404s – one of a sequence of blindingly quick laps.

“We tried our best, worked very hard with the engineers, and it works,” said Bruni. “I’m very happy to get my first pole for Porsche at my first qualifying attempt with the team.”

The only worry for Bruni was a brief off-track excursion near the end of the session on the tyres which he will have to start the race on.

Westbrook will start second, with Dirk Werner third in the #911 Porsche, his 50.606s best being two-tenths off the sister car’s pole time. John Edwards was fourth quickest for BMW, ahead of the Corvettes of Tommy Milner and Jan Magnussen.

Dirk Muller suffered a troubled session in the second Ford GT, locking up and almost going off in the early stages. He will start seventh, ahead of Bill Auberlen’s BMW.

Snow’s Lamborghini on top in GTD

In the GT Daytona class, Alegra Motorsport’s Patrick Long set the early pace, ahead of the similar CORE Autosport-run Porsche 911 of Colin Braun, before Madison Snow took over the top spot in his Paul Miller Racing Lamborghini Huracan.

Snow lowered the fastest time to 52.508s, as Braun snatched second in the battle of the Porsches from Long with a 52.699s lap, but that was still almost two-tenths off Snow’s pole time.

“It was a great car,” said Snow. “There was nothing else in the car that I could find.”

Jack Hawksworth was fourth quickest in his Lexus, ahead of Jens Klingmann’s BMW M6.

Jan Magnussen: This is where the title is won and lost