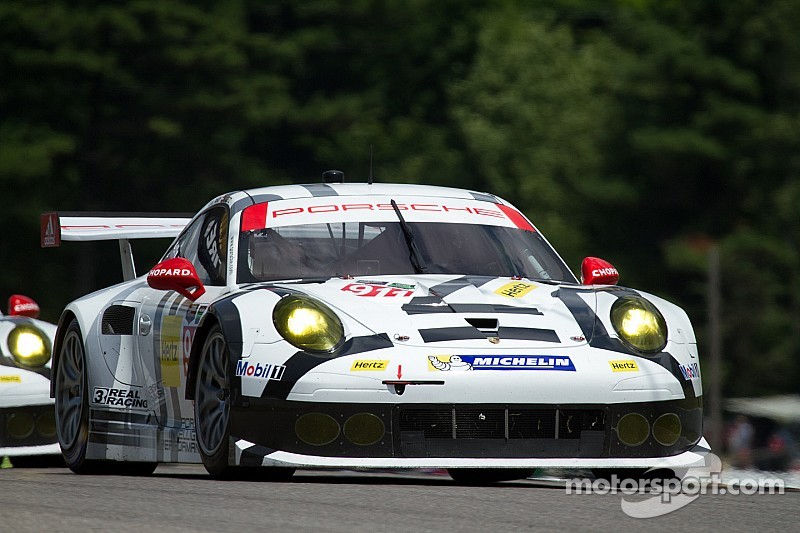 Porsche North America placed one of its two Porsche 911 RSR into the top-five of the GTLM class results.

Stuttgart - In today’s sixth round of the Tudor United SportsCar Championship at Canadian Tire Motorsports Park, Porsche North America placed one of its two Porsche 911 RSR into the top-five of the GTLM class results. The finish came after a mistake-free race. In the customer team-focused GTD class, Park Place Motorsport nearly scored their first victory in the class before a next-to-last lap pass dropped them to second in a dramatic battle.

Nick Tandy started and finished the No. 911 Porsche North America Porsche 911 RSR. The Brit relinquished the ride less than one hour into the event to teammate Richard Lietz (Austria) to maximize pit strategy in the two-hour, 45-minute race. Tandy returned behind the wheel for the final hour. The strategy, coupled with two error-free pit stops by the Porsche North America operation, moved the team as high as fourth in class. They would take the checkered flag in fifth.

The team car, the No. 912, was started by Patrick Long in eighth-place. The American charged the car as high as fourth before handing the wheel to Michael Christensen (Denmark). After pit stop sequencing, the second works car was in eighth in the incredibly competitive field of factory cars. The young Dane, who like Tandy and Lietz had never before driven at Canadian Tire Motorsports Park, took the checkered flag in ninth.

The only customer team to field a Porsche 911 RSR in North America, Team Falken Tire, had the best qualifying effort for the marque this weekend starting third. Bryan Sellers started third in the field. The American fought off multiple attacks before succumbing to the onslaught late in his stint. Wolf Henzler (Germany) took over from sixth for the second-half of the race eventually finishing eighth in class.

Richard Lietz (#911): “With such a short race track and the amount of cars on it, you have to be very lucky in traffic. I got the slow cars in the right spots and I didn’t lose too much time, so I was very happy. At the end of the stint the drink bottle didn’t work, so it got quite hot in the car. We still have to improve the balance a bit, but we did our best. We have a chance to play with the rest but we are still not fast enough.”

Nick Tandy (#911): “We were battling from the start with the No. 56 car. It was a really great race. We managed to get ahead in the first stint and the race was panning out as we’d planned. We were good through the middle of the race and then we met again in the final stint. In traffic he managed to get past and toward the end we got caught out in traffic and dropped back too much. We’re quite happy with the points from this weekend. It was more than we were expecting.”

Patrick Long (#912): “The opening stint I had a good battle with Farnbacher and Tandy. I tried to maintain position at the end with Priaulx. My main focus was to keep the car clean and within striking distance.“

Wolf Henzler (#17): “A tough race. The balanced changed from the first to the second stint and we don’t know why. Our tires worked well and were consistent. That was a huge gain from the last race. We can be proud. We had a good weekend. I hope next race we will do better for sure.”

In the GTD class, Canadian Tire Motorsport Park proved to be a good circuit for the Porsche 911 GT America customer teams, as many of the Porsche entries ran their best race of the season. The No. 73 Park Place Motorsports Porsche 911 GT America with former Carrera Cup champion Kévin Estre (France) and American Patrick Lindsey behind the wheel, narrowly missed its first win in the Tudor United SportsCar Championship as it was passed on the next-to-last lap and finished second. In all, Porsche customer’s 911 GT America cars took six of the top ten spots in GTD.

The next Tudor United SportsCar Championship race will take place on July 25 in Indianapolis, USA.