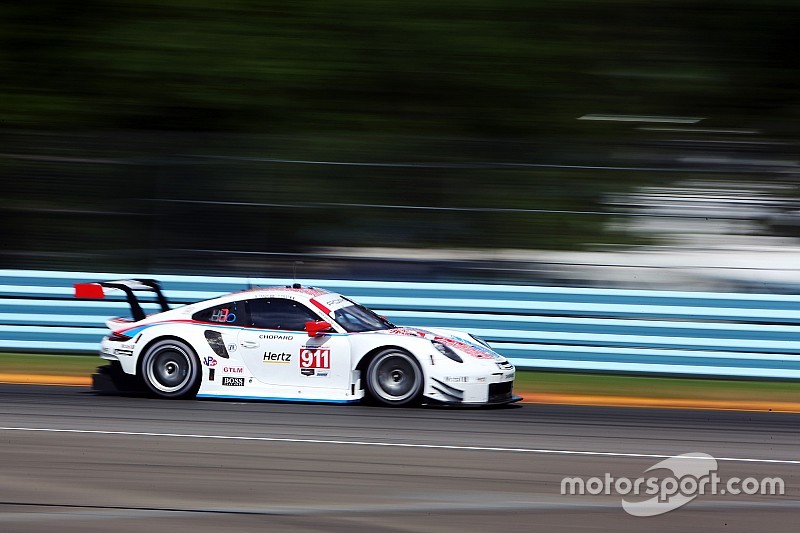 The second GT Le Mans win of the year for the #911 Tandy/Pilet-steered Porsche 911 RSR was the fourth for the team, as their teammates Earl Bamber and Laurens Vanthoor won at Long Beach and Mid-Ohio in the #912 car. The two entries now lie one point apart at the top of the GTLM driver standings, and Porsche leads the Manufacturer standings.

Although the cars lined up seventh and eighth on the grid, slick teamwork got both cars to the front of the class, allowing the team to split strategies so its options were covered with or without a late yellow-flag. As it was, Tandy/Pilet’s strategy meshed best with the way the full-course cautions flew, whereas the Bamber/Vanthoor machine had to make a late splash-n-dash for fuel.

Said Hollwarth: "First and foremost, I'd like to thank the whole team. The work over the last weeks at the IMSA series races, the successful Le Mans outing and today's long-distance race at Watkins Glen have been really tough. Victory is the just rewards for the entire crew.

“Our drivers didn't have the fastest car in the field, but through consistent and completely flawless drives, we've now come out on top. That was a real textbook example of teamwork.”

Pascal Zurlinden, director GT factory motorsport, added: "We've won four out of the five races so far this season. We're leading all classifications and we're now alone at the top of the Endurance Cup [the championship that incorporates just IMSA’s four endurance rounds]. It's been a wonderful season so far.

“I feel for the No. 912 car. The yellow flag simply came out at the wrong time.

“In the drivers' championship, both crews occupy the first two positions, so we now have two irons in the fire. The racetracks at the upcoming events over the next few weeks should suit our 911 RSR."

Pilet paid tribute to the crew, commenting: “The fact that we won this race is simply incredible. Our car wasn't running perfectly on Friday, and we experienced some problems in the warm-up before the race. Even on the grid our engineers did everything they could to fix the car for the race. They did a sensational job.

“Precisely this work, even during the pit stops and in making the right strategic decisions, was the key to victory. Plus, we drivers didn't make any mistakes.”

Tandy, who eventually crossed the line less than half a second in front of the Corvette C7.R of Antonio Garcia/Jan Magnussen, said: “"We certainly didn't have the fastest car today, but perfect teamwork secured the victory for us. The pit stops were perfect, the strategies were simply good, and with absolutely consistent and immaculate driving, the drivers brought our Porsche 911 RSR to the finish line.

"Not everything went smoothly at the beginning of the race weekend, but when it came to the crunch we were 100 percent there. This is a fantastic and very valuable win for me."