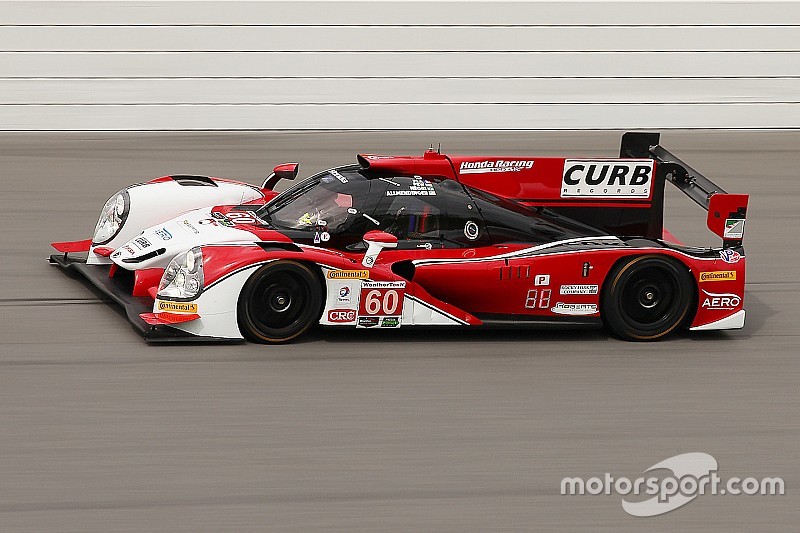 Daytona Beach, Fla. (Jan. 8, 2016)– Picking up where it left off in 2015, Michael Shank Racing posted the fastest times in Friday’s opening day of the Roar Before the Rolex 24 at Daytona International Speedway.

Ozz Negri ran a lap of 1:39.655 (128.604 mph) in the No. 60 Michael Shank Racing with Curb/Agajanian Honda Ligier JS P2 to lead the first of eight scheduled sessions for the IMSA WeatherTech SportsCar Championship. Ligier factory driver Olivier Pla – who will join Negri, John Pew and NASCAR Sprint Cup Series regular AJ Allmendinger in the car at the Rolex 24 At Daytona on Jan. 30-31 – was fastest in the day’s second and final practice, with a time of 1:39.445 (128.875 mph).

“This is what happens when you have a year of experience with a car,” Negri said. “We were quickest in 50 percent of the official practices last year. The car is good, and it shows.”

Prior to Negri’s fast lap, co-driver Pew led the morning session. Pew, Negri and Allmendinger teamed with the late Justin Wilson to win the 2012 Rolex 24 for Shank in a Daytona Prototype.

“We’ve worked on the car a lot over the year, and obviously it’s pretty good right now,” Pew said. “I’m pretty comfortable in the car. Today, I had to start out with a pretty slick, crazy track, and by the end of the session I was pretty quick. This is huge difference from last year, when we came here with a new car and I was a nervous wreck.”

Colin Braun led both sessions in Prototype Challenge (PC), with a best lap of 1:42.423 (125.128 mph) in the No. 54 CORE autosport Flex-Box/Composite Resources ORECA FLM09. The team won its class in the 2014 Rolex 24 and finished second last year, winning the PC championship both years.

“It doesn’t really matter who’s the quickest in practice, but it’s always a nice day when you’re at the top of the board,” Braun said. “We’ve had good success here, but we need to keep working hard to get better and improve. We know everyone else is doing the same thing, and there are a lot of other very good teams and lineups here.”

Everything feels different in the Ford GT. You’re sitting quite a bit lower.

“Coming from having done Daytona the last couple of years with Corvette Racing, it’s been awesome to get that experience under my belt,” Briscoe said. “Winning the race last year, it was phenomenal. I learned a lot with those guys, it’s a great team. I had great teammates with Corvette Racing, so I’m definitely bringing that experience with me here to Ford Chip Ganassi Racing. But [the Ford GT is] a whole new experience.”

Corvette Racing returns with two entries as well, and Briscoe is preparing for anything.

“It’s hard to compare the cars, there have been rule changes this year, such as more downforce,” Briscoe explained. “Everything feels different in the Ford GT. You’re sitting quite a bit lower. It’s all different, but at the end of the day, we’re all going to be very close and competitive, just making the best of what we have.”

The GT Daytona (GTD) field features a number of new cars, with manufacturers bringing in all new GT3-spec entries. Quickest of the day was Raffaele Giammaria in the No. 51 Hublot/Globaljet Ferrari 458 with a 1:48.358 (118.275 mph).

Defending GTD champions, Townsend Bell and Bill Sweedler, have transitioned to O’Gara Motorsport and the No. 11 Lamborghini Huracán GT3 for a full-season effort. This afternoon, the team introduced its additional drivers for the Rolex 24 At Daytona, Richard Antinucci and Edoardo Piscopo.

The No. 11 Huracán GT3 isn’t alone, as Audi, BMW and Porsche are brand new cars as well. O’Gara isn’t worried about the competition though, and feels very good about the team’s chances due to the significant experience of his drivers.

“We’re thrilled to have Townsend and Bill bring their expertise and all the time they’ve spent,” O’Gara said. “At the same time, Edoardo and Richard bring a wealth of experience in the development of the Super Trofeo car, and the GT3.”

The Roar testing also includes the IMSA Continental Tire SportsCar Challenge, with Multimatic Motorsports leading both Continental Tire SportsCar Challenge sessions. Billy Johnson was fastest in the morning practice – held on a drying track – with a lap of 2:12.069 (97.040 mph) in the No. 15 Ford Shelby GT350R-C. Co-driver Scott Maxwell was fastest in the afternoon, running 1:57.765 (108.827 mph) to pace the Grand Sport (GS) class.

Long-time Street Tuner (ST) contenders Compass360 Racing debuted its No. 76 Ford Shelby GT350R-C at the session. Pierre Kleinubing was fourth-fastest on the day in the new car he co-drives with Paul Holton, running a best lap of 1:58.839 (107.843 mph).

“I like it a lot,” Kleinubing said. “We’re learning much from the other Mustang guys, and that’s the biggest reason we’re here – what we learn in this test will make our season that much better. The car is very well sorted, and I’m happy where we’re sitting right now. We’ve got room for improvement – this car has a lot of potential.”

Complete Roar before the 24 testing results

DeltaWing prototype tops a practice session for the first time