Who topped the charts in GT practice?

For Risi Competizione, being able to participate at Sebring is a fete in itself after the team’s No. 62 Ferrari F458 Italia was destroyed in an accident in the early hours of the Rolex 24 At Daytona. Leading the opening GT Le Mans (GTLM) practice session for Saturday’s Mobil 1 Twelve Hours of Sebring Fueled by Fresh From Florida in a brand-new car was an even greater accomplishment. Fittingly, it was Matteo Malucelli – who was briefly hospitalized after the Daytona incident – at the wheel for the day’s best lap of 1 minute, 59.394 seconds (112.769 mph) in the car he co-drives with Giancarlo Fisichella and Gianmaria Bruni. “We are confident for Saturday, because we are on a good pace and the car is quite good,” Malucelli said. “We know that the race is 12 hours and that’s a long way. We were lucky, because it was a bad accident [at Daytona], but that’s racing. Now we are restarting from this point, and I just hope we are luckier here.”

Corvette Racing took the next two positions in GTLM. Tommy Milner was second in the No. 4 Corvette C7.R co-driven by Oliver Gavin and Robin Liddell, running 2:00.027 (112.175 mph), followed by Antonio Garcia in the No. 3 Corvette C7.R shared with Jan Magnussen and Ryan Briscoe, which ran 2:00.111 (112.096 mph). Saturday’s Mobil 1 Twelve Hours of Sebring Fueled by Fresh From Florida begins at 10:15 a.m. ET. Live FOX Sports 1 coverage runs from 10 a.m.-1 p.m., with the remainder of the event streamed on imsa.com. The Motor Racing Network will broadcast it in its entirety on IMSA.com, MRN.com, SiriusXM Channel 117 and local affiliates. 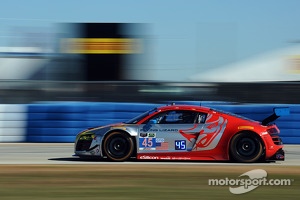 TRG-AMR’s James Davison led the GT Daytona (GTD) class with a lap of 2 minutes, 3.762 seconds (108.780 mph) in the No. 007 Aston Martin V12 Vantage shared by Al Carter and David Block. The car escaped serious damage near the end of night practice when Davison hit debris, cut the right-front tire and spun. “We had a bit of bad luck tonight, but these things happen,” Davison said. “Our outright performance is obviously there. We did a simulated qualifying run this morning, and we clearly had a competitive lap time. But this is a 12-hour race, and we’ve got a bit of work to give our car a good balance on the longer runs.” Carter ran in Thursday’s Lamborghini Super Trofeo race to get additional track time, and wound up winning the event. “I’ve had only one race at Sebring under my belt before today, and one race in the Aston Martin at Daytona, so I’m still getting used to it,” Carter said. “But we’ve put together a nice two-car deal for the season, and we’re looking to be competitive, not only for this weekend, but for the entire season. Running in the Lamborghini today really helped me, because Sebring is so unique and the extra track time really helped.”

Risi Competizione is back