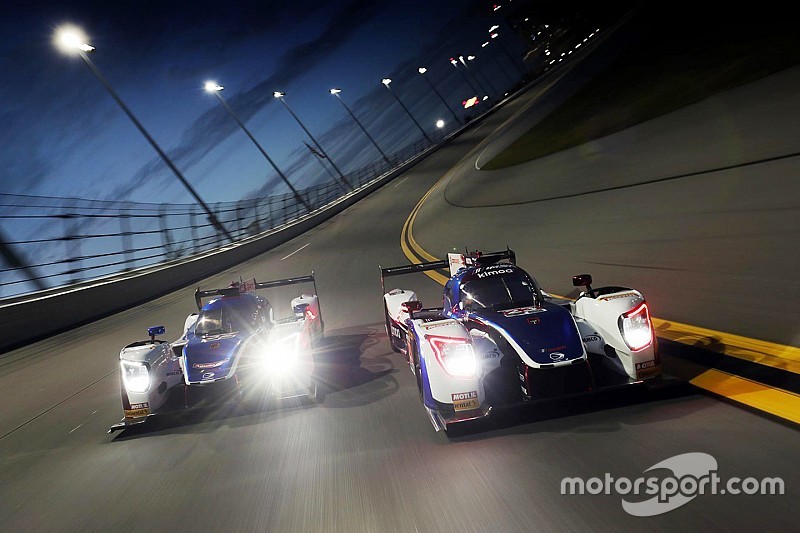 Ex-F1 racer Felipe Nasr was quickest in the only dark session of the pre-Daytona 24 Hours ‘Roar before the Rolex 24’ test, as Fernando Alonso got his first taste of night-time prototype driving.

Nasr, driving the #31 Action Express Cadillac DPi he shares with Eric Curran and Mike Conway, posted his best time of 1m37.322s with 21 minutes of the 90-minute session remaining.

Meantime, star turn Alonso had his first experience of running at night in the #23 United Autosports Ligier, completing 13 laps in the early stages of the session despite regular interruption from red flags.

He posted a best time of 1m38.857s, before handing over to Phil Hanson and then Lando Norris, the latter posting the car’s fastest time to take 16th place with a 1m38.531s lap.

At the top, Nasr’s fastest time was 0.112s faster than the #10 Wayne Taylor Racing Cadillac, which Ryan Hunter-Reay had earlier put to the top of the timesheets. Jordan Taylor then improved the #10 Cadillac’s time with six minutes to go, but it was still 0.055s off Nasr’s mark.

Christian Fittipaldi went third fastest with 27 minutes remaining in the second AXR entry, with Eddie Cheever III completing a lockout of the top four for Cadillac with his time of 1m37.483s posted with 10 minutes remaining.

Ferdinand Habsburg was best of the rest in the Jota-run #78 Jackie Chan DC Racing Oreca LMP2 with a late lap 0.310s off the pace that relegated the CORE autosport Oreca of Colin Braun to sixth.

Ricky Taylor and Juan Pablo Montoya produced the strongest performance of the test for the Penske Acuras by taking seventh and eighth place, separated by less than half-a-tenth.

Dominik Bauman was quickest in GTD in the #14 3GT Racing Lexus RCF, 0.032s faster than Mirko Bortolotti in the #11 Grasser Lamborghini Huracan.