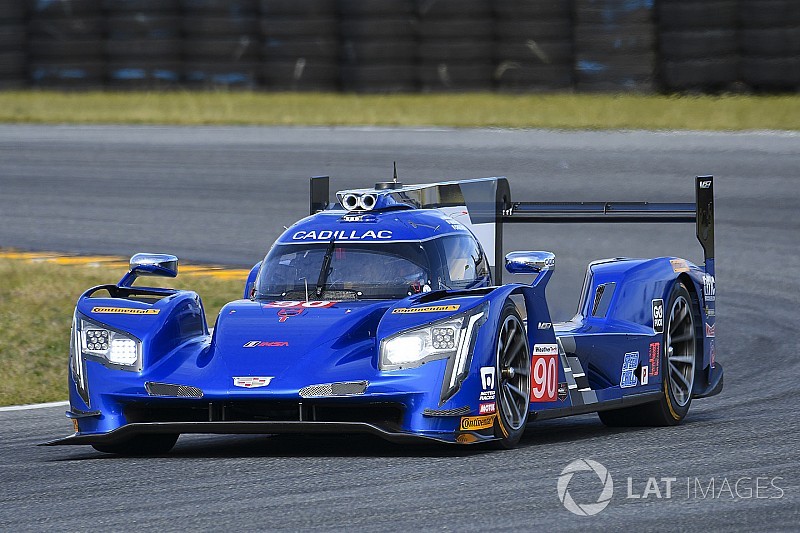 Tristan Vautier topped the first session of the final day of the pre-Rolex 24 Hours test at Daytona.

The Frenchman hit the front for the first time just nine minutes into the 30-minute session, putting in a lap of 1min37.828s in the #90 Spirit of Daytona Cadillac DPi-V.R. He then improved to a 1m37.027s before finally ducking well under the 97sec barrier with a 1m36.690s lap.

Filipe Albuquerque, driving the #5 Action Express Cadillac, came close to deposing Vautier but his lap, set shortly before the interruption of a red flag with 13 minutes remaining, was a mere 0.021s off.

The top two remained unchanged once the session restarted, although Renger van der Zande set the third fastest time in the #10 Wayne Taylor Racing Cadillac on his final lap with a 1m37.130s.

Ricky Taylor was the best non-Cadillac in the Penske Acura, lapping 0.602s off the pace and slotting in just ahead of Felipe Nasr in the #31 Action Express Cadillac late on.

Dane Cameron, who had been fastest before Vautier hit the front, ended up sixth in the second Acura ahead of the Jota-run #78 Jackie Chan DC Racing Oreca of Antonio Felix da Costa.

Oliver Jarvis was the best of the Mazda Team Joest entries in eighth ahead of the second Jota entry of Robin Frijns and the sister car of Harry Tincknell.

Fernando Alonso’s #23 United Autosport’s Ligier was 11th and 1.694s off the pace, although the time was set by Lando Norris.