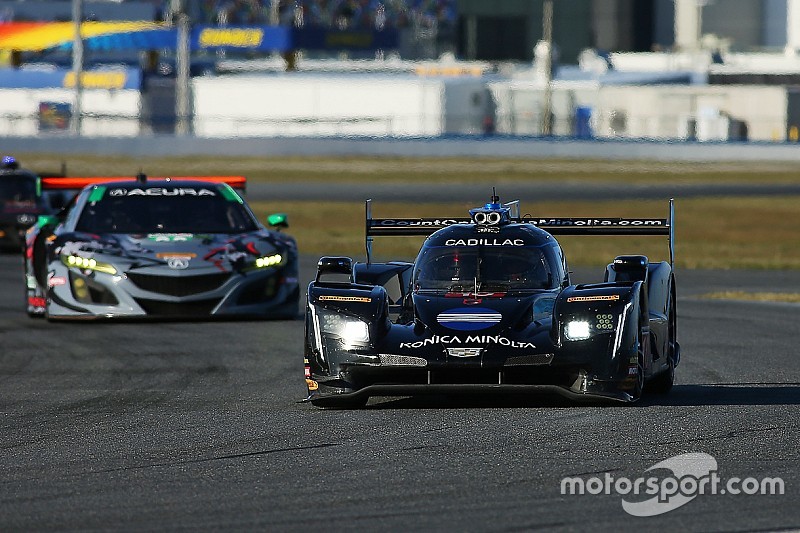 Jordan Taylor was fastest in the final practice session of the Roar before the Rolex 24 test at Daytona, heading a Cadillac 1-2, but Orecas played a starring role too.

Taylor put the #10 Wayne Taylor Racing Cadillac DPi-V.R to the top of the timesheets with 10 minutes remaining with a time of 1m36.757s, relegating long-time leader Mike Conway's #31 Action Express Cadillac to second place by 0.357s.

Pato O’Ward had briefly held second in the #38 Performance Tech Motorsports Oreca before Antonio Felix da Costa took that place from him shortly before the halfway mark in the similar Jota-run #78 Jackie Chan DC Racing entry.

Olivier Pla had been quickest very early in the session in the #2 Extreme Speed Motorsports Nissan DPi, but was eventually shuffled down to fifth with a time 0.768s off the ultimate pace, ahead of the second Jota Oreca of Williams Formula 1 driver Lance Stroll.

Simon Pagenaud was the best of the Penske Acura drivers in seventh place, ahead of Christian Fittipaldi’s #5 Action Express Cadillac.

Fernando Alonso did not participate in the session, but teammate Lando Norris set the 10th-fastest time in the #23 United Autosports Ligier before handing over to Phil Hanson. Nicolas Lapierre made a late improvement to take ninth in the second ESM Nissan.

Laurens Vanthoor set the pace in GT Le Mans in the factory Porsche with a best time of 1m44.550s, with teammate Nick Tandy slotting into second with 15 minutes remaining.

The fastest time set overall during the three days of Roar was by #31 Action Express Cadillac driver Felipe Nasr in Sunday’s prequalifying session, which sets the pitbox and garage order.

His time of 1m35.806s was 0.231s faster than Tristan Vautier managed in the #90 Spirit of Daytona Cadillac as the marque’s four cars proved the quickest at Daytona, despite their off-season switch from 6.2- to 5.5-liter V8s.

Joey Hand’s 1m44.610s lap set during prequalifying in the #66 Chip Ganassi Racing Ford GT was the quickest in GTLM, while in GTD, Rolf Ineichen’s 1m47.104s set in the first session on Friday in the Grasser Racing Lamborghini Huracan was never bettered.