The winners of the first race in the TUDOR United SportsCar Championship.

Action Express Racing knew the drill. The team that won in its very first race – the 2010 Rolex 24 At Daytona – returned to Daytona prepared and ready to win the first race in the TUDOR United SportsCar Championship. 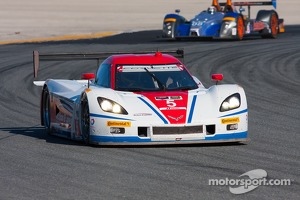 "I was probably the one that expected that (2010 victory) the least of anybody, but this one wasn't unexpected," team owner Bob Johnson said. "This one we expected to win. Our guys have all worked extremely hard to get the win, and I'm just proud as can be that all that hard work paid off."

The race came down to a 10-minute sprint to the checkered flag, with Barbosa beating rival Max Angelelli to the checkered flag by 1.461 seconds – the second-closest finish in event history. Barbosa won his third Rolex Daytona Cosmograph (he also won in class in 2003 and was part of the Action Express winning lineup in 2010). Fittipaldi took his second Rolex 24 victory (he won overall in 2004) and Bourdais – a four-time Champ Car titlist – won the event for the first time.

"Bob was convincingly, absolutely dead sure that we were going to win it, and I was scared to death," Bourdais admitted. "But he was right. The guys were prepared. Everybody was on top of things. Everybody knew exactly what to do and how to do it, and the execution was perfect. What can I say? It's a dream come true."

Angelelli was looking to complete a dream weekend for Taylor Racing, which had team owner Wayne Taylor co-driving with sons Rickey and Jordan for the first time.

"I tried everything to find a good balance, a good run," Angelelli said. "But I didn't have enough for him. I thought I had (enough) when I picked up the car for the final two stints. But the final rush, unfortunately not."

Action Express had a second car in the fight, with the No. 9 Corvette DP of Brian and Burt Frisselle, John Martin and Fabien Giroix taking third, around 20 seconds behind their winning teammates. 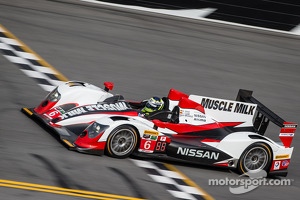 Scott Pruett entered the race with the opportunity to break a tie with Hurley Haywood and become the lone six-time overall winner of the Rolex 24. His No. 01 Chip Ganassi Racing with Felix Sabates Ford EcoBoost/Riley co-driven by Memo Rojas, Sage Karam and Jamie McMurray led after six hours, but suffered major right-front damage when something broke and sent Pruett into the wall. The team lost more than an hour in the garage and was out of contention.

In Prototype Challenge, Colin Braun took a one-lap triumph in the No. 54 CORE autosport ORECA FLM09 with Jon Bennett, Mark Wilkins and James Gue. It was another standout performance for Braun – who first came to the national stage as part of "Team 16" in the 2005 Rolex 24. The following year, he took a DP victory in GRAND-AM's Brumos Porsche 250 in July, joining Krohn Racing teammate Jorg Bergmeister. Only three months ago, Braun set the all-time speed record on the 2.5-mile Daytona trioval, running an exhibition lap of 222.971 mph in a Michael Shank Racing Ford EcoBoost DP.

"It's really cool to win here at Daytona," Braun said. "Obviously this is a special place, and it's neat to do it with these guys at CORE autosport. I've driven with Jon the last couple years and I'm thankful that he gave me an opportunity to drive with that group."