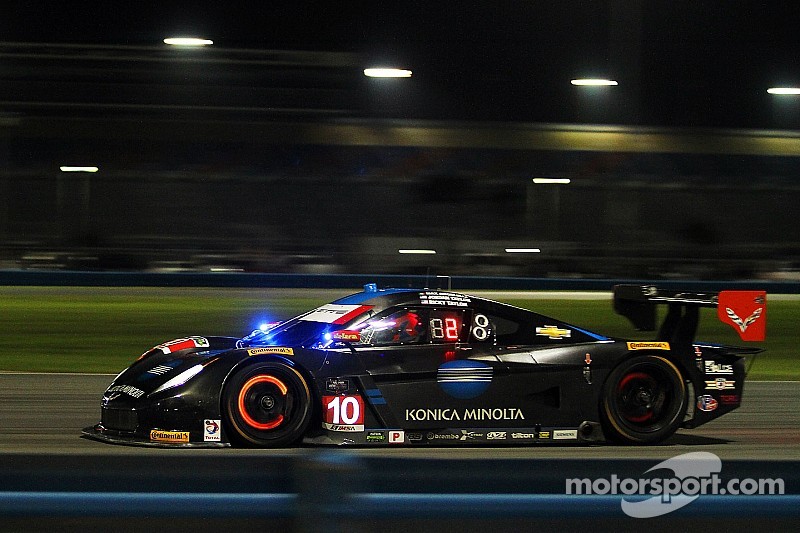 There have been a lot of changes in the running order since we last gave a major race update.

Daytona Beach, Fla - The Rolex 24 rolls on, but some cars aren't rolling anymore. The caution flag returned for the fifth time when the No. 7 Starworks prototype spun and stalled in the first corner.

Tony Kanaan took over the wheel of the No. 02, but the Ganassi 1-2 was spoiled when he damaged the front splitter and needed to go back into the garage for repairs. They have slowly worked their way back into the mix after losing a lap.

The AF Corse suddenly slowed on the NASCAR track and the issue soon became apparent when the left rear wheel went off on its own.

On an ensuing restart, two PC cars (No. 38 and No. 85) went spinning in the first corner and the field scattered left and right, thankfully missing both.

The next caution was quite a violent accident. After spinning, the No. 51 AF Corse Ferrari of Francois Perrodo tried to rejoin, pulling directly out in front of the No. 007 TRG-AMR of Brandon Davis. The pole-sitting GTD car slammed into the front of the Ferrari, ending AF Corse's night.

On the following restart, CORE Autosport, which was leading the PC class, got spun. Moments later, another PC car (No. 7) got punted. Later, the No. 5 Action Express Corvette lost the lead after blowing the backstretch chicane. Their troubles did not end there though. Without warning, the car stalled with no fuel pressure, an apparent connection problem. The car dropped from second place to seventh, three laps down before it was back out racing.

On the restart that followed Action Express' issues, the No. 24 BMW got smashed around and is no longer in contention for the GTLM victory. And just one more thing of note ... Mere seconds separate multiple contenders in P, GTLM, and GTD still.

SpeedSource loses No. 70, but Hinchcliffe still proud of the effort

Porsche factory cars collide during the night in Rolex 24