Acura Team Penske held the advantage after two hours in the 57th running of the Rolex 24 at Daytona, as Juan Pablo Montoya surged to the front of the order early on. 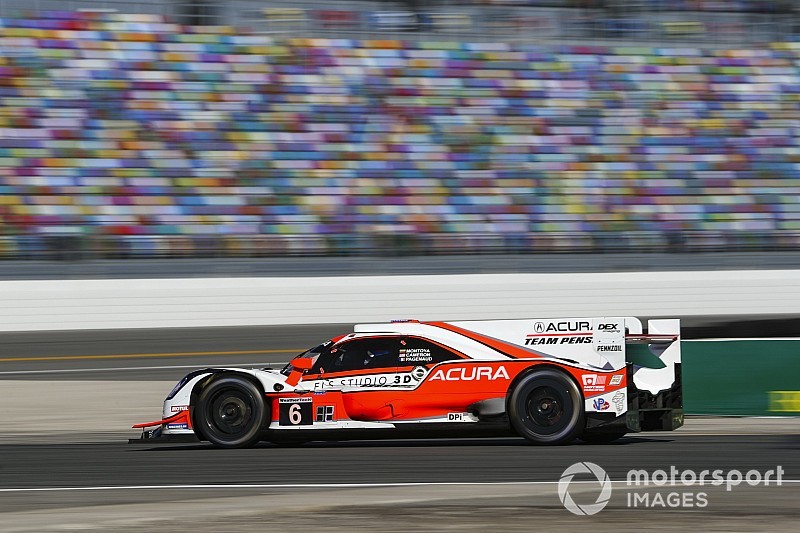 Montoya's #6 Acura ARX-05 passed Oliver Jarvis's polesitting #77 Mazda RT24-P for the lead shortly after the first round of pitstops half an hour into the race, with Ricky Taylor also passing Jarvis to make it an Acura 1-2 early on.

Jarvis fought back to take second just after the one-hour mark, and briefly repassed Montoya for the lead before slipping to third behind both the Colombian and the #5 Action Express Cadillac of Filipe Albuquerque prior to the first full-course yellow of the race, which was triggered by an engine blow-up for the #99 NGT Motorsport Porsche.

That prompted the entire DPi field to come into the pits, with Montoya handing over the reins of the #6 Acura to Dane Cameron shortly before the two-hour mark.

The #31 AXR Cadillac, which Felipe Nasr handed over to Eric Curran under caution, jumped up to second amid the reshuffle, ahead of the #77 Mazda, now in the hands of Audi DTM ace Rene Rast.

Helio Castroneves, taking over from Taylor, was fourth in the #7 Acura, while Olivier Pla was fifth in the #55 Mazda.

Fernando Alonso climbed aboard the #10 Wayne Taylor Racing Cadillac at the same time, replacing Jordan Taylor at the wheel, and was eighth behind the best of the JDC-Miller Caddys and the Juncos Racing car after two hours.

The #5 AXR Cadillac dropped back to ninth after replacing the rear deck due to a rear light problem.

There was early drama for the CORE autosport Nissan, which suffered a dramatic right-rear puncture on the banking while Jon Bennett was at the wheel. Bennett recovered the car to the pits to hand over to Romain Dumas, who picked up a penalty for pitlane speeding.

LMP2 was led by James Allen in the #18 DragonSpeed Oreca-Gibson, ahead of Ryan Cullen in the sister #81 car.

In GT Le Mans, Ford led after two hours as a result of Joey Hand pitting the #66 car shortly before the full-course yellow.

Poleman Nick Tandy had built a comfortable lead prior to the caution period in the #911 Porsche 911 RSR, but Patrick Pilet ran in third just behind the lead Corvette C7.R of Tommy Milner.

James Calado spun the Risi Competizione Ferrari on the oil left by the #99 Porsche but continued, with the #62 car holding fourth ahead of the top BMW M8 GTE of Alex Zanardi.

Both Ford and Corvette suffered early issues, with the #67 machine losing five laps behind the pit wall early on and the #3 Corvette having to fix front damage under caution.

Porsche's #912 car also lost ground as Earl Bamber made two unscheduled stops, the second due to a splitter problem.

GT Daytona was led by the #11 Grasser Racing Lamborghini after two hours, but Rik Breukers was due to serve a 3m40s penalty for violating the wave-by procedure under the full-course yellow.

Second at that stage was the #12 AIM Vasser-Sullivan Lexus of Townsend Bell, followed by the #29 Land Motorsport Audi of Christopher Mies in third.

Morbidelli: ‘A-spec’ Yamaha not an advantage in 2021