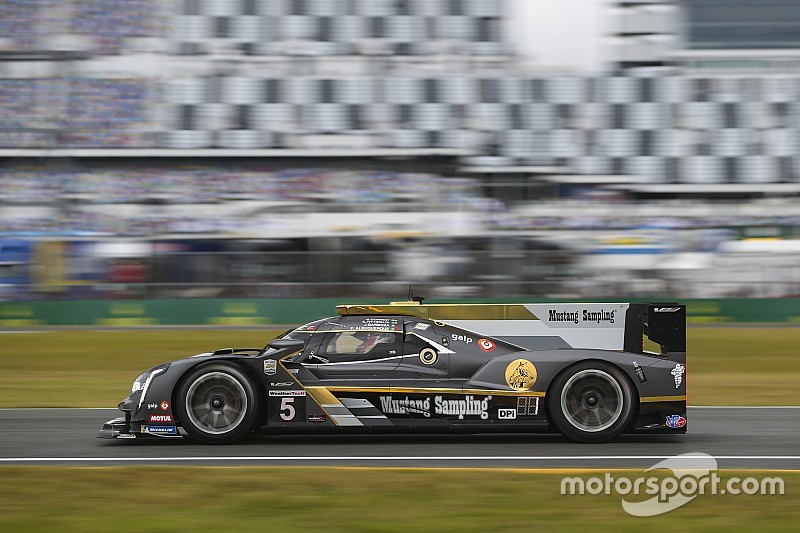 Defending Rolex 24 Hours winners, the #5 Action Express Racing team, topped the last practice session at Daytona with its Cadillac 0.4sec ahead of its nearest rival.

Filipe Albuquerque yesterday suffered a brake fire in the AXR Cadillac DPi-V.R that prevented him from setting a qualifying time but had no such issues this morning on his way to a 1min34.358sec lap of the 3.56-mile road course.

Earlier this morning, it was announced that due to a travel issue for Mike Conway, the #5 Cadillac will be shared between just three drivers, the winning combo from 2018 – Albuquerque, fellow full-timer Joao Barbosa and the retiring Christian Fittipaldi.

Precisely four-tenths behind the Caddy in this last practice was the #55 Mazda of Olivier Pla, who in turn was over three-tenths up on the second AXR entry of Pipo Derani.

Former IndyCar champion Simon Pagenaud slotted his Acura ARX-05 into fourth spot ahead of the second Mazda of Rene Rast, while Stephen Simpson took sixth for JDC-Miller Motorsports ahead of the team’s first race with a DPi car.

Frederic Makowiecki grabbed top spot in GT Le Mans with the polesitting #911 Porsche 911 RSR, 0.134sec ahead of the #66 Ford GT of Dirk Muller, which ground to a halt on course in the hands of Sebastien Bourdais and caused the session’s only red flag.

Jan Magnussen was third fastest in the #3 Corvette which will roll off from the front row of the GTLM field tomorrow afternoon, while Richard Westbrook produced the fourth best time this morning in the second Ford.

Pedro Lamy in the Spirit of Race Ferrari 488 was quickest of the GT Daytona entries, while Nick Cassidy put his AIM Vasser Sullivan Lexus into second spot ahead of two Porsche 911 GT3 Rs from Black Swan Racing and Park Place Motorsports.