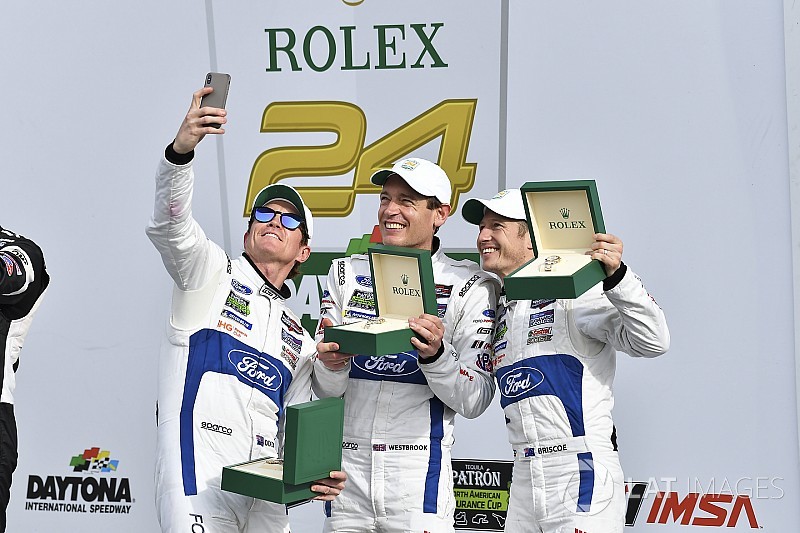 The Rolex 24 Hours at Daytona always kicks off the international motorsport season in style – but there's an extra incentive for drivers to scoop a victory there...

Chip Ganassi loves winners. As Grand Marshal for last weekend’s Rolex 24 Hours, there was nobody happier than him in Victory Lane, as Ryan Briscoe, Scott Dixon and Richard Westbrook delivered his 200th win as a team owner. As he puts it: “It’s all about the rings and Rolexes!”

The event’s title sponsorship makes this race special. While other events might carry similarly high worth on a drivers’ resume, the involvement of the world’s most valuable watch brand (valued at $8bn by marketing research consultant Kantar Millward Brown) adds kudos.

The coveted watches on offer to winners are Rolex’s Cosmograph Daytona. What makes them unique is the engraving on the back – you simply can’t buy one of these watches with ‘WINNER’ engraved beneath the Daytona logo. Even if you do have the requisite $17k to buy a regular one from a boutique, if you want the stainless steel version (as received by the winners) then there can be a two-year waiting list!

Rolex’s title sponsorship of the Daytona 24 Hours began in 1992, but its association with this part of the world can be traced way back to Sir Malcolm Campbell breaking the World Land Speed Record on Daytona’s famed beach in 1935 while wearing one of its timepieces. And his 276mph Bluebird resides in the track’s museum, just outside Turn 4. That’s quite some legacy.

Another legend of these parts is Hurley Haywood, the first man to win the Daytona 24 Hours on five occasions overall.

“Many of these guys out there are multi-millionaires,” he says. “They’re not here because they’re getting paid a lot of money. They want to win this watch.

“You ask any of these guys, and they’re here to win this Rolex watch. And that’s what makes this race such a classic. That’s the honor.”

As Dixon added another Rolex to his collection, for his success with Ford, he believes the race is becoming a stronger lure for drivers from across the world than ever before.

“We’re seeing a lot more people coming over from Europe now to this race,” says Dixon. “You’ve always had everyone together at Le Mans, which is on an invitation basis, but it’s been a while since we’ve had so much interest in this race.

“For a lot of people in this industry, watches have been very traditional. This event is a brand statement for Rolex, it’s been at the forefront which feels like forever. There’s nothing cooler for me than winning my first Rolex 24 in 2006 – I remember so well going on stage and getting that little green box! When you start in racing, you know the big races like the Le Mans 24 Hours, Daytona 24 and Indy 500, and there’s always been an iconic watch on the line – so to win one was huge.

“The watches I’ve won here are very special to me. I have some pretty crazy diamond-encrusted things we used to get for IndyCar championships, which are interesting to look at... But, for me, the Daytona Rolexes are very significant in the world of motorsport, and also achievement.”

Now an avid watch collector, Dixon owns 45 Rolexes, and blames his old teammate Dario Franchitti for drawing him into “the vintage aspect” – where watch values can balloon depending on their rarity and condition. The Paul Newman model which Dixon wore to the Grand Marshal dinner at Daytona was one of the finest that my esteemed colleague Jack Forster, Editor in Chief at watch enthusiast bible Hodinkee, had ever seen.

“Dario is more a car guy, he collects the cars and I collect the watches!” laughs Dixon. “He was the guy who got me into the vintage aspect, because he’s big on the history side with his cars. His passion is Jim Clark, Porsches, and he has a few Rolexes too – so he probably did start it, but I find with watches it’s a very slippery slope for me! I get one, then I want the other variation.”

Franchitti won the 2008 running of the race. He's a seasoned veteran of Ganassi’s challenge for overall honors and knows this event like the back of his hand.

He explains the challenge of the through-the-night racing: “Most of this race, 14 hours, is dark. And the sun coming down is a real pain, and as it sets you can be driving blind at 200mph. You don’t want something jumping out at you! The dawn is quite good, although I hate getting up early, but it’s a nice time to be in the car – especially when you know the car’s running well.

“I napped all the time, I’d be in the bus all the time. Scott would start the car, I’d watch, then go back, and then for stint three I’d get in. That would be about 7pm. Maybe do three hours in the dark.

“In the middle of the night, you’re asleep in bed, and then some guy – usually a big dude – is shaking you. You’re in your fireproof underwear, put your firesuit on – which is usually nice and warm – then they take you in a golf cart, get your helmet on. You sit there, still half asleep – well I was anyway – then the car pulls in. As the door opens they pull the other guy out, and you jump in. You get belts on, door slams, fire the car and you go.

“You’re going down pitlane and feel like ‘where am I?’ – take off the pit limiter after the hairpin, and then the adrenaline kicks in and it’s ‘Oh my God, here we go’. By the time you get to the banking, your eyes are on stalks, but you soon calm down and get into the swing – and everything becomes normal.

“Actually, an odd thing happened here the first time I drove at night – going on to the banking out of the chicane, I got dizzy. Your inner ear gets really messed-up between the light and dark part of the track. That’s tough to get used to!”

Like Haywood, Scott Pruett has won the Rolex 24 five times, and brought the curtain down on his career at the weekend.

“There’s not many drivers who’ve had success this late in their career as I have,” says Pruett. “The media has been on my case for five years or so: ‘When are you going to retire?’ – so I announce that I’m retiring, and they say: ‘So why are you retiring?!’

“With all the wins, and all the successes, to retire here at the Rolex seemed the most appropriate. This is the place, y’know – this is my house! I get goosebumps every time I come here.”

Pruett has a special plan for his quintet of Rolexes that he has earned.

“As great as trophies are, there’s nothing quite as special as this,” he smiles. “Talk to drivers throughout the world, taking this cherished item away from here is what makes the Rolex 24 at Daytona so special.

“It’s a pretty awesome thing, and to win as many watches as I have, I feel very fortunate. As each of my kids turn 21, then it’s something I’ll give them as a present.

“I have so many wonderful memories, I walk away from here happy.”

A couple of days after the chequered flag fell, winner Christian Fittipaldi dropped into Motorsport.com's offices in Miami. He had claimed his third victory, tying him with the likes of Derek Bell, Juan Pablo Montoya, AJ Foyt and Al Unser Jr.

One of the nicest moments was in Victory Lane, as his daughter was entrusted to carry the box containing his hard-earned new watch.

He said the key to victory in this year’s race was surviving the phase when all of his rivals suddenly dropped out of the reckoning – including the sister Action Express car.

“In the end we were driving so slowly, just quickly enough to keep our advantage but not too much to stress the engine,” he said. “We had our data guy glued to the temperature gauges – if they went up, he told us to slow down. This was on a lap-by-lap basis, so it was all about the laptime.”

And, as Dixon concludes, that’s what makes the Rolex connection work in a racing context: “It’s the whole time factor, right? That’s what we race against.

“It’s a timed event, each lap is a portion of that, how much time you spend in the pits is a factor of the outcome.

“It’s a race against time, that’s what it ultimately comes down to.”

And every time he looks at his wrist, he’s reminded of that.