Oliver Jarvis put the #77 Mazda RT24-P on pole for the 57th Rolex 24 Hours at Daytona, but the battle was closer than anticipated as Ricky Taylor was only two tenths slower in the lead Acura ARX-05. 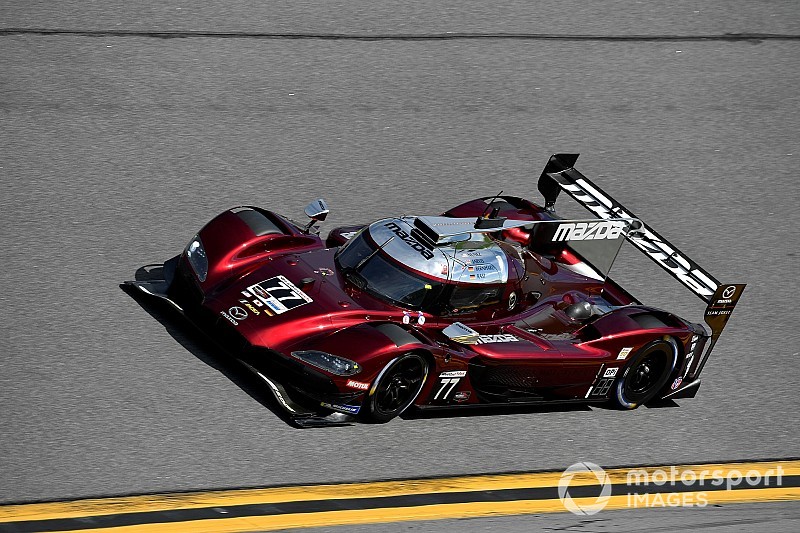 Jarvis turned three sub-1min34sec laps to eventually set a 1min33.685sec which was fast enough to eclipse teammate Jonathan Bomarito in the #55 Mazda by half a second.

But in the waning minutes, Acura Team Penske showed its hand, with Taylor and Juan Pablo Montoya filling that gap, the former whittling down to a 1min33.873sec lap, and JPM coming up a further 0.222sec short.

Jordan Taylor in the Wayne Taylor Racing Caddy was precisely 0.2sec faster than the similar car of Juncos Racing in the hands of impressive IMSA debutant Agustin Canapino.

Action Express Racing’s defending Rolex 24-winning car suffered a brake fire in the hands of Filipe Albuquerque and will start from the back of the DPi field.

James Allen took LMP2 pole by over half a second for DragonSpeed ahead of Gabriel Aubry in the PR1/Mathiasen Motorsports, the pair both qualifying ahead of Jon Bennett’s CORE autosport Nissan DPi.

Nick Tandy grabbed pole for Porsche by over 0.3sec as four different brands filled the top four places in the category.

The #911 911 RSR eclipsed the best effort of reigning IMSA GTLM champion Jan Magnussen of Corvette Racing by 0.326sec, while Ryan Briscoe in the #67 Ford GT, Risi Competizione’s Ferrari 488 driven by Davide Rigon and Earl Bamber in the #912 Porsche were mere hundredths apart in second through fifth.

Joey Hand was sixth in the second Ford ahead of both BMW M8s and the Corvette of 2016 Rolex 24 winner Oliver Gavin.

Marcos Gomes put Via Italia’s Ferrari 488 on pole by a mere 0.067sec as the top four Silver and Bronze drivers battled hard for pre-eminence, each one split by less than one tenth of a second.

Ben Keating was second best in the Mercedes AMG GT run by Riley Motorsports, just ahead of Trent Hindman in the #86 Meyer Shank Racing Acura NSX, and Giacomo Altoe in Ebimotors’ Lamborghini Huracan.

Over half a second off the pace was the Grasser Racing Team Lamborghini of Rolf Ineichen, the Spirit of Race Ferrari of Mathias Lauda, and Spencer Pumpelly’s Magnus Racing Lambo completing the top seven.

Mazda in “completely different stratosphere” at Daytona in 2019