The battle for supremacy in the Rolex 24 at Daytona continued between the Wayne Taylor Racing Cadillac and the best of the Mazdas as the race reached the 10-hour mark. 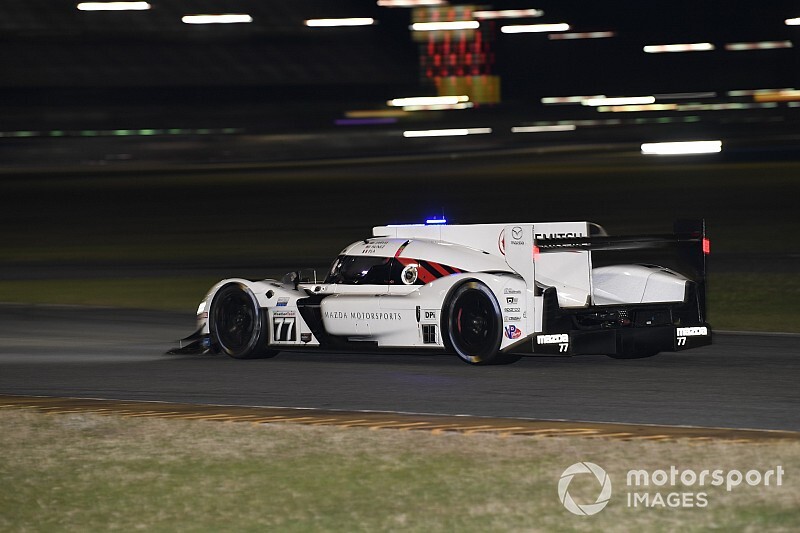 Following the end of the second caution period of the race, in which the #77 Mazda RT24-P did not pit, Oliver Jarvis led briefly before coming in to hand over to Tristan Nunez, handing the advantage back to IndyCar ace Scott Dixon in the #10 WTR Cadillac DPi-V.R.

Nunez reassumed the lead in the middle of the ninth hour as Dixon and the rest of the DPi runners pitted, with the #77 Mazda the only one of the front-runners running off-strategy.

At the nine-hour mark, Dixon was back in front following Nunez’s pitstop, having just set the fastest lap of the race, and when the Kiwi handed the WTR Caddy over to Ryan Briscoe the Australian kept up the good work.

Boosted by a fastest lap of his own, Briscoe had stretched the advantage out to more than 20 seconds over Felipe Nasr in the #31 Action Express Racing Cadillac before both cars pitted just shy of the 10-hour mark, along with the #55 Mazda.

That meant Nunez was back into the lead with an advantage of 8s over Briscoe at the top of the hour, with Pipo Derani – taking over from Nasr – a further 19s behind in third.

Jonathan Bomarito had the second Mazda in fourth, 35s down on the sister car, with the #5 JDC-Miller MotorSports Caddy and the best of the Acuras both over a minute down.

In LMP2, Ben Hanley had stretched a lead of 12s at the wheel of the DragonSpeed Oreca before handing over to Colin Braun.

But Gabriel Aubry took over the PR1 Mathiasen Motorsport Oreca at around the same time and was running less than a second adrift of the class leader after 10 hours.

The Tower Motorsport by Starworks entry was removed from realistic contention with an engine system issue that forced it into the garage, costing it 14 laps.

BMW managed to wrest back the lead in GT Le Mans after losing the advantage to Porsche, Augusto Farfus’s black-liveried #24 M8 GTE blasting by Mathieu Jaminet’s #912 911 RSR-19 along the banking during the 10th hour.

Previously, Earl Bamber had passed the #24 car before handing over to Jaminet, but John Edwards was a little over three seconds clear after 10 hours after taking over from Farfus.

The #911 Porsche driven by Matt Campbell was third ahead of the best of the mid-engined Corvette C8.R, the #3 car of Jordan Taylor. But there was drama for the sister #4 machine which was forced behind the wall with an oil leak.

In GT Daytona, Zacharie Robichon was leading the way by just under three seconds after jumping the Pfaff Motorsports Porsche 911 GT3 R ahead of Madison Snow in the Paul Miller Racing Lamborghini Huracan GT3 Evo.

Daniel Morad had managed to get the WRT Audi R8 LMS up to third in class ahead of the best of the AIM Vasser Sullivan Lexus RC F GT3s, the #12 car of Aaron Telitz, and the sole Ferrari 488 GT3 in the field, the Scuderia Corsa car of Alessandro Balzan.