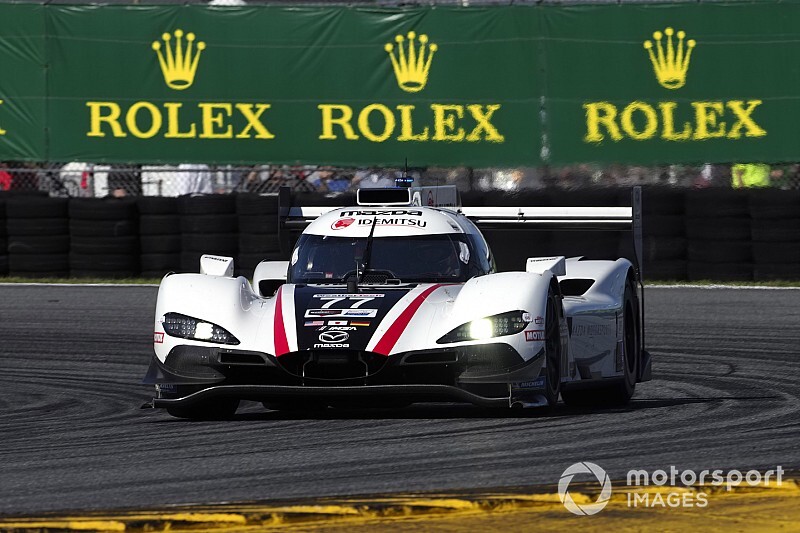 The #77 Mazda RT24-P that started on pole holds a 20sec lead after the opening two hours of the 58th Rolex 24 Hours at Daytona, while the Porsche 911 RSRs run 1-2 in GTLM, and the Pfaff Motorsports Porsche leads GT Daytona.

Oliver Jarvis immediately pulled out a lead over his Prototype opposition from the start, and co-driver Tristan Nunez is continuing his fine work.

In second is now the Wayne Taylor Racing Cadillac DPi-V.R of Kamui Kobayashi, while third is defending IMSA WeatherTech SportsCar champion Dane Cameron. Cameron’s teammate Juan Pablo Montoya had to cede second to the Action Express Racing Cadillac of Felipe Nasr in the opening stint. However, approaching the two-hour mark, the Whelen Engineering-sponsored Caddy lost time with an extra pitstop after losing power when debris got sucked into its air intake. It now runs eighth overall and last in class – albeit still on the lead lap – in the hands of Pipo Derani.

Fourth is the second Mazda, with Ryan Hunter-Reay having taken over from Jonathan Bomarito, while slick Penske pitstops have helped the second Acura vault the two JDC-Miller MotorSports Cadillacs, and three-time Indy 500 winner Helio Castroneves is now at the wheel.

A brilliant opening couple of stints from LMP2 polesitter Ben Keating has given PR1 Mathiasen Motorsports a comfortable lead, so his teammate Simon Trummer is now leading Henrik Hedman of DragonSpeed by half a minute, pursued at a similar distance by David Heinemeier Hansson in the Tower Motorsport by Starworks entry.

Frederic Makowiecki and Earl Bamber run in tandem 10sec clear of the opposition after strong opening stints from their co-drivers Nick Tandy and Laurens Vanthoor.

Vanthoor initially dropped behind the #3 Corvette C8.R of Antonio Garcia but both Corvettes have now fallen behind the #24 BMW M8 currently steered by Supercars hero Chaz Mostert.

The #25 BMW suffered a slow pitstop due to a sticking wheelnut but Philipp Eng is now sixth in class. The Risi Competizione Ferrari 488 is last, and James Calado reported to IMSA Radio that he feels the car is lacking power. He also suffered a puncture and required an extra stop.

Perhaps surprisingly, the GT Daytona action has been close but incident-free, with the Pfaff Porsche 911 GT3 R – started by Zacharie Robichon, now driven by Dennis Olsen – running up front, just clear of the Turner Motorsports BMW M6. Robby Foley has handed over to Bill Auberlen who is currently shaping up Olsen for a potential pass.