Rolex 24 GTD winner unaware he was in lead

Grasser Racing driver Christian Engelhart says he didn’t realise he had put his Lamborghini into a class-winning position in the Rolex 24 at Daytona until after the race was halted.

That followed a surge in the closing stages by Engelhart, who advanced from ninth to first in treacherous conditions while several other contenders for victory – notably the #33 Riley Motorsports Mercedes AMG-GT3 and the #29 Land Motorsport Audi R8 LMS – were delayed by spins.

But Engelhart admitted post-race that he had no idea that he’d taken the lead in his class until the second red flag came out with two hours to go, after which the race was not resumed.

“We were actually one lap down when I started the stint,” recalled the German. “I managed to overtake the leaders, so when the yellow came out we got a wave-by and rejoined the pack.

“We were very far behind, at this point I asked what position we were, and we were P8 or P9. After that I never got any more information. I was just pushing.

“When the red flag came out, I didn’t know I was first, I thought we were still fighting and I was giving everything to come to the front. I didn’t expect we were already [there].”

Engelhart’s late spurt meant Grasser successfully defended the GTD title it won last year, although the 32-year-old German was not part of the lineup that took honors in 2018.

“After crossing last year the line in the second GRT car in formation together with Mirko, to be this year on the winning car in such difficult conditions is a dream come true,” added Engelhart.

“Really happy for Grasser Racing Team, which is like a family for me, to achieve this for a second time in a row. Very proud and emotional today.”

Bortolotti said he was glad he could team up with Engelhart at Daytona this time around after his 2017 Blancpain GT Series co-champion missed out last year.

“I’m glad to have Christian on the car with us this year,” said Bortolotti. “Last year he didn’t share a car with us, and he wasn’t part of the win.

“After the race I texted him, I said ‘we will come back next year with you’, so to come back and do it is special.

“Also personally it was really special coming back this year doing it again with a brand-new car, the first race for the Huracan GT3 Evo. Starting with a win in such a crazy race as we’ve seen today is absolutely incredible, phenomenal.” 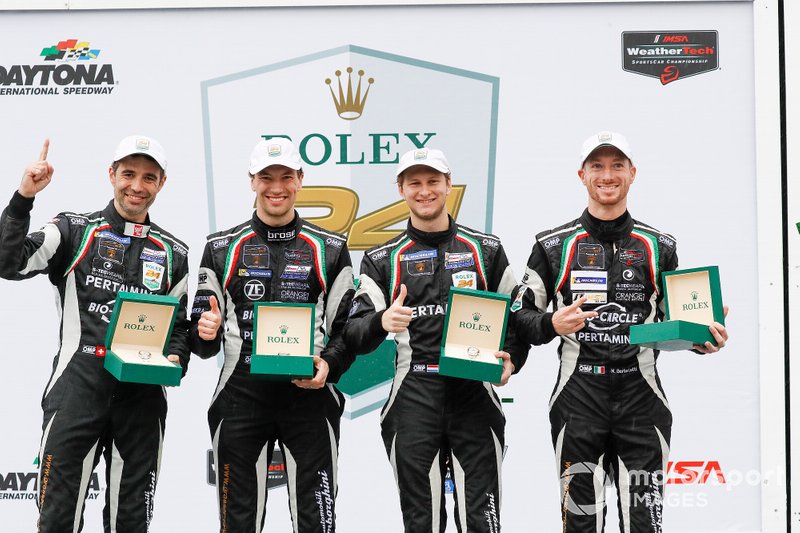 Alonso wanted Rolex 24 to be stopped while second