Rossi: Acura “absolutely” could have won in the dry 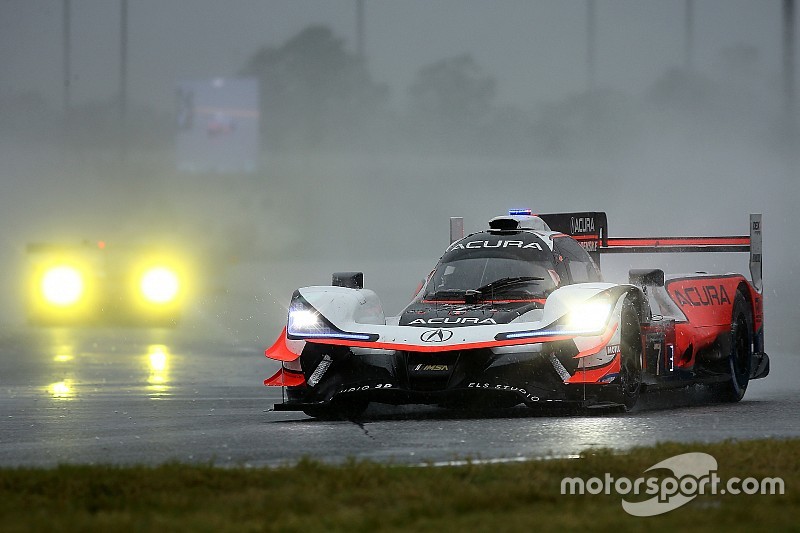 Alexander Rossi believes that his #7 Acura Team Penske ARX-05 could definitely have won the Rolex 24 at Daytona had the race stayed dry.

Although the Cadillac DPi-V.Rs of Wayne Taylor Racing and Action Express Racing appeared to be very slightly stronger than the two Acuras toward the end of a stint, in the dry, the combinations of Rossi/Helio Castroneves/Ricky Taylor and Juan Pablo Montoya/Dane Cameron/Simon Pagenaud appeared able to limit their deficit.

However, Fernando Alonso’s meteoric pace in the wet in the 16th hour driving the WTR Cadillac, and Felipe Nasr’s speed after the first red flag left the #7 Acura trailing, and it was eventually classified third.

“For sure, they were definitely stronger than us in the wet,” Rossi told Motorsport.com. “I don’t know if we have an explanation for that, but it was pretty clear.

“In the heavy downpour we were OK but it was that point that they red-flagged it again anyway.

“It’s unfortunate. I think that the #7 car had a great shot. In the dry, the Acura Team Penske cars were really, really strong, but it wasn’t meant to be.”

Asked if his Acura could have won in a dry race, Rossi responded: “Absolutely”.

However, the IndyCar ace, who was a fairly late call-up to the Penske squad to replace Graham Rahal as “third man” in the #7 car, agreed that the track conditions had forced IMSA’s hand in throwing a red flag.

“It was pretty horrendous,” he said. “You get to the point where it’s nothing to do with dry line or a wet line, it’s just trying to avoid puddles. And I think ‘puddles’ is a generous word!

“There were places coming onto the banking where the car was actually submerging in water so at that point it’s just dumb luck and you’re a passenger and you can’t really focus on performance.”

Nonetheless, Rossi appeared more reticent on whether he agreed that IMSA should end the race early without another attempt at restarting.

“It’s not our decision so no point talking about it,” he said.

Ford’s Daytona victory loss a “kick in the teeth”