Alexander Rossi says his eagerness to succeed on behalf of others is adding to the pressure of an action-packed few days at the IMSA finale followed by the Baja 1000.

The IndyCar ace this weekend resumes his endurance-driver role in the Wayne Taylor Racing Acura ARX-05, as he tries to help Ricky Taylor and Filip Albuquerque defend their slender lead in the 2021 IMSA WeatherTech SportsCar Championship and clinch the team’s first championship since 2017, and Acura’s third straight.

Albuquerque, Taylor, Rossi and Helio Castroneves clinched victory in the season-opening Rolex 24 Hours at Daytona, and the Taylor/Albuquerque combo have since added two more wins, three third places and three fourth places, to lead the Prototype standings with one round to go, ahead of Action Express Racing’s Cadillac-mounted Felipe Nasr and Pipo Derani.

From Road Atlanta, Rossi will then fly to the Baja peninsula to take part in the legendary Baja 1000 driving a Honda Ridgeline truck, seeking a class victory.

In both instances, he tells Motorsport.com that he feels a weight of expectation to deliver, less for his sake than for others.

“In the case of IMSA, driving for Wayne Taylor Racing and Acura, I’m the guy that just keeps the car going and keeps it in contention while Filipe and Ricky are resting,” he says. “Out of the car, I’m there to help the team in any capacity I can, whether that be with knowledge I can bring from IndyCar, knowledge that I can bring from racing the Acura for Penske in the past couple of years – maybe there’s something Ricky has forgotten from his time there! Then when I’m in the car, it’s about going fast but also being smart enough to not put the car at risk. I’ve got to help defend their points lead and stay ahead of the #31 [AXR’s Whelen Engineering car driven by Nasr/Derani].

“That said, you can’t take it easy. IMSA is so competitive now, whether that’s the full-time guys or drivers like me who are brought in to help with the endurance races. You’ve got some of the elite guys of motorsport out there.

“But it is a different mindset because unlike in IndyCar, you can’t be self-centered. You can’t just make the decision, ‘I’m going to go 100 percent and take all the risks I would in an IndyCar,’ because in this circumstance it’s almost not your call. You have to have the bigger picture in mind, which is helping to bring the championship home for Acura, for Wayne Taylor and for Filipe and Ricky.

“That’s going to be a lot of pressure, because basically whoever finishes in front between us and the #31 is going to win the championship. And we remember that last year at Petit, driving the Acura for Penske, myself, Ricky and Helio were in a dog fight with the #31 for six of the 10 hours. We’re fully expecting something similar, it’s just that we’re in a blue Acura instead of an orange Acura this year.”

Rossi says that he felt a similar obligation at Daytona this year – that he was racing on behalf of others. 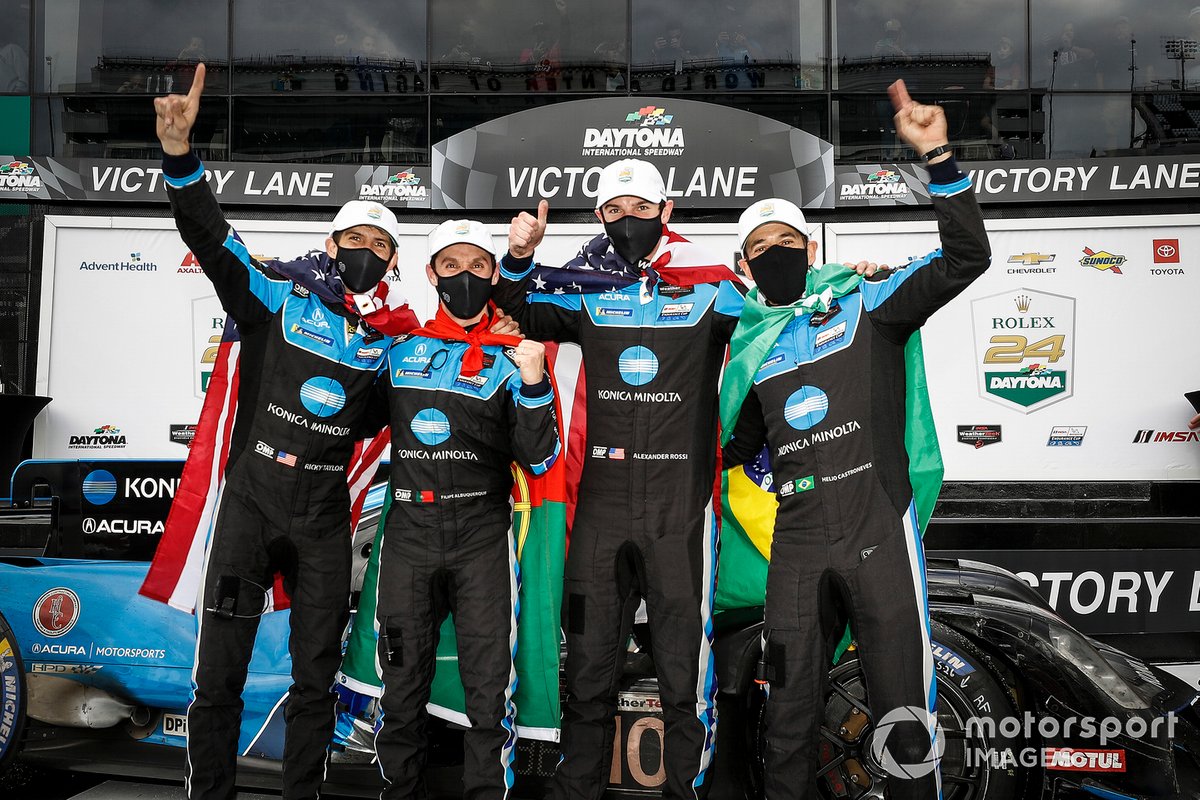 He recalls, “I was thrilled to be able to check the Rolex 24 off the list personally. That’s obvious, right? It’s one of the classics. But I was really pleased for Acura and HPD, because I know how badly they had wanted that win while the cars were being run by Team Penske; I’d been part of that line-up. Ricky and Helio won the IMSA championship with the car last year, but they and Acura really wanted to prove the car in a 24-hour race, so getting that done this year was huge for them.

“And obviously Filipe was a huge factor in that win, bringing it home for us. He’s a fantastic driver. And Wayne Taylor Racing… what can you say? It’s well known that they didn’t get their hands on the car until pretty close to the Roar [Before the 24, IMSA’s preseason test] because last season ended so late. So for them to be able to switch from Cadillac to Acura, very different cars, and just keep on winning was impressive. Being in Victory Lane at Daytona, seeing what it means to Wayne and his family and his sponsors… it’s a very special feeling, to share those moments. I’ll remember it forever.

“And now I hope I can share that kind of moment with them and the guys from HPD again on Saturday night – ideally with a race win, but most importantly the championship.”

Will third time be the charm at Baja?

Rossi will be taking part in the Baja 1000 for a third time, racing a Honda Ridgeline in Class 7, for production trucks open to chassis modification but limited to six cylinders. In 2019, Rossi suffered a spectacular shunt while leading his class so there is a score to be settled.

“Class 7 is the perfect class for the Ridgeline as it’s a mid-size truck and its engine is the 3.5-liter V6 and so HPD absolutely deserves to see its potential fulfilled,” he says. “I don’t know I’d necessarily be heading back down to Baja if we had gone on to win the last time we raced there, but to me it feels like unfinished business.”

“Jeff Proctor’s team is great, the truck is great – they’ve won the class in just about every other big off-road race – and so I really want to do it justice, give the program the result it deserves. It’s the best truck in class.”

If racing IMSA sportscars is somewhat alien to a “selfish” open-wheel racer, in terms of thinking of the big picture for his co-drivers, sharing a truck at Baja is different again.

“With each stage being unique, it’s not like you can compare data with your co-drivers and learn from them,” Rossi comments. “You can’t look at a section of the rally and say, ‘I need to be better at this bit, or on that terrain,’ or whatever. That aspect of motorsport doesn’t really exist in this type of racing. We each have our task, our 200-or-so miles, and our common goal is to bring the truck back in one piece, and hopefully you’ve done that while going faster than your rivals.

“The weird part is dealing in minutes and hours, rather than tenths of a second. A very different mindset is required. Gaining 30sec on a section is great but if you do that while elevating the risk of getting a puncture, the net result isn’t worth the risk.”

Rossi, now 30, said he doesn’t foresee a future in off-road racing – the Baja bug hasn’t bitten yet, although he admits he will keep his “ear to the ground if there was a Trophy Truck ride available some time in the future”. Instead he sees next week’s race as a chance to fulfill the promise he’s seen in the Ridgeline.

“Honestly, I’m doing it for Honda, for Jeff Proctor and for his team, in order to validate the time we’ve spent down there, and their efforts in giving us the best truck in class.”