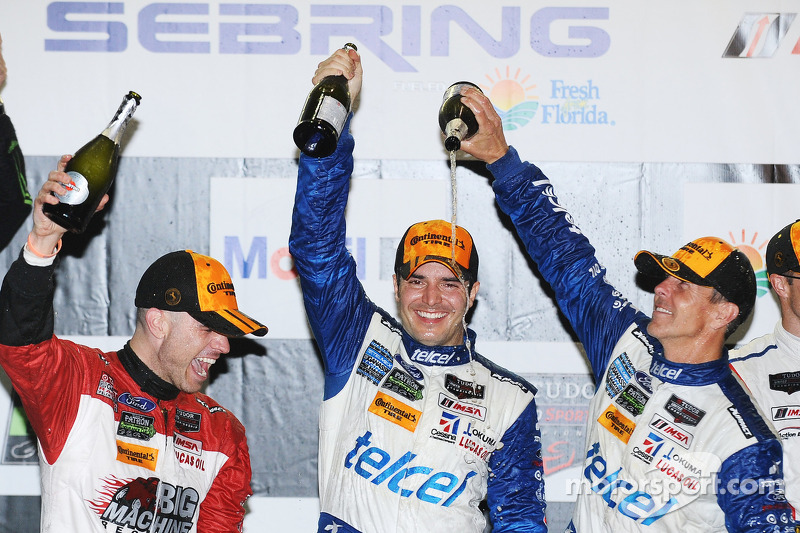 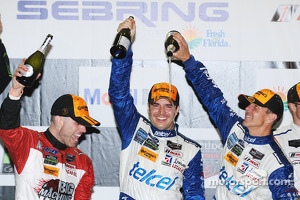 Franchitti held onto the lead during a 20-minute sprint that came after the last full-course caution of the night to give Ford Racing their fourth overall win at the Twelve Hours of Sebring. Co-drivers Franchitti, Memo Rojas, and Scott Pruett also made Chip Ganassi Racing the first team to win Sebring, the Rolex 24 at Daytona, the Indianapolis 500, and the Daytona 500.

“We’ve come from a lot of hard work with the new rules, with the new engine and all of the development behind that,” said Franchitti. “This finish was incredible. I just couldn’t believe we were in the position to go for the win. I knew it was ours to lose and I had to keep hitting my marks and getting my laps in. I’m sort of struggling to sort of sit here and, look at our names at the top, being victorious at Sebring. I won P2 last year, but to win overall, we’re now going to see the Ford banner up there on the pit when I come back next year, that’s pretty special. This was certainly the biggest day of my career and for Chip (Ganassi) to win his first Sebring 12 Hours, it’s just been amazing.”

The last Ford overall win at the historic 3.74-mile, 16 turn track was in 1969. But the last one in which the company was directly involved, came in 1967 at the hands of Mario Andretti and the late Bruce McLaren, driving the No. 1 Ford GT40 MkIV and posted a margin of victory, 12 laps, so great in number that it remains today as the largest MOV in the track’s history.

“You read about stuff like this. What really makes it so sweet is that this is a win made possible by a production-based Ford EcoBoost,” said Jamie Allison, Director, Ford Racing. “Literally it comes out of our production vehicle. It just makes it so, so sweet because it validates what we do at Ford, that the technology we have in our cars is good enough to power an all-out win here at the Sebring 12 Hour.”

Roush Yates has aligned itself with Ford Racing’s “One Ford” approach to build the 3.5 liter V6 Ford EcoBoost engine with a majority of its parts taken straight from the same manufacturing facilities as the parts found in Ford automobiles throughout the United States.

Epic podium for Starworks PC at Twelve Hours of Sebring