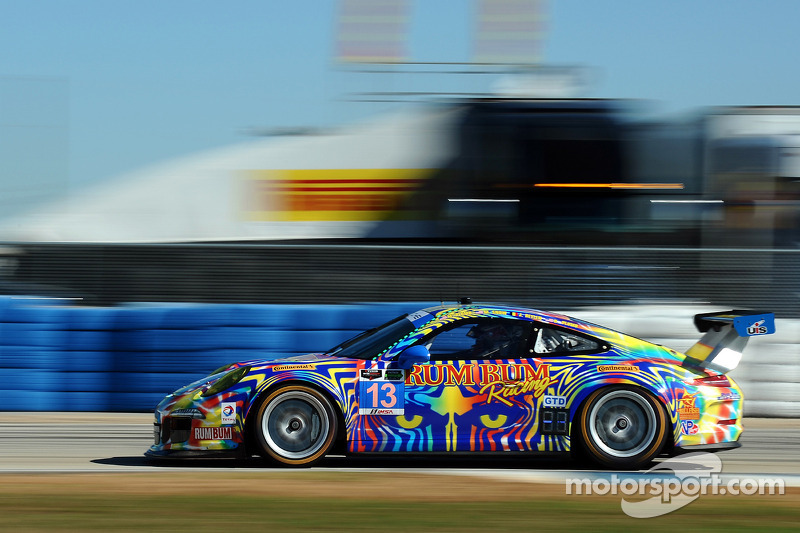 Team looking for second victory in a row

Luis Bacardi’s Rum Bum Racing travels to Kansas Speedway this weekend fresh off of a breakthrough first IMSA Continental Tire SportsCar Challenge victory of the season just two weeks ago at drivers Matt Plumb and Nick Longhi’s home track, Lime Rock Park. It was a much welcomed result for the 2012 & 2013 championship winning team who had seen a run of bad racing luck through the opening three races of the IMSA season.

The team now hopes this will be the uptick in momentum needed as the 2014 championship races on with the No. 13 Rum Bum Racing Porsche in pursuit of a third consecutive championship title.

The fifth round of IMSA competition sees Rum Bum Racing return to Kansas Speedway which utilizes a good portion of the oval as well as the tight infield road course section. The six turn, 2.37-mile ‘roval’ circuit is a challenging one that Rum Bum Racing is well-prepared to take on having shown strong pace there in 2013.

After running toward the front through most of last year’s Kansas race, a late-race caution led to a nail-biting three-lap shootout with Plumb running second and challenging fellow American driver John Edwards for the win. But despite a valiant effort to deliver Rum Bum Racing’s 15th race win, Plumb settled for the second step of the podium – finishing just .425-seconds behind the leader. And with most teams building off of the data gathered last year, the race is certain to be another highly competitive one.

“Kansas made for some great racing last year so we’re excited to get back to it – especially coming off of such a big win for the team at Lime Rock,” said Team Manager and Driver Matt Plumb. “The race track is a bit of a difficult one with the high speed oval portions and the really tight and technical infield section. Last year everyone went into it perhaps a little bit blind, but now everybody has something to work off of this year. The 2014 championship is very tough – it seems everybody has upped their game and the competition is fierce. But we just have to keep doing what we’ve been doing. We have the best team out there and with Joe Varde calling the strategy for us, we’re hoping to just keep delivering strong performances and leapfrog back up to the top of the championship standings.”

Rum Bum Racing, who has won 15 IMSA Continental Tire SportsCar Challenge races, will look to add to that number this weekend with Longhi and Plumb returning to the podium – this time on the top step.

The Kansas Speedway schedule sees Rum Bum Racing take part in two hour-long practice sessions on Friday ahead of a 15-minute qualifying session Friday evening which takes place at 10:40 PM ET. The 2.5-hour Grand Prix of Kansas is set to go green on Saturday at 7:15 PM ET and can be followed with live timing and scoring on www.imsa.com.