The GT Daytona field has generated some fantastic scraps throughout the 2020 IMSA WeatherTech SportsCar Championship season, and this is indicated by the fact that the #14 AIM Vasser Sullivan Lexus, the Wright Motorsports Porsche and the #86 Meyer Shank Racing Acura squads are covered by just three points at the top of the Teams’ championship.

But yesterday’s Petit Le Mans emphasized how the IMSA’s Balance of Performance has honed the competitiveness of the GTD field. Of the 13 entries, eight appeared to have class-winning pace for long periods throughout the 10-hour race, despite the diversity of Pro and Am drivers, and these potential victors came from five of the class’s nine manufacturers.

Ultimately, Jeff Westphal, Alessandro Balzan and Cooper MacNeil conquered in the Ferrari 488 GT3, a car coming toward the end of its fifth season in IMSA competition. The entry’s last win had come at the same event two years earlier when MacNeil, Gunnar Jeannette and Daniel Serra won the Motul Petit Le Mans two years ago.

With the Ferrari having run in the top five (of those cars on the same strategy) throughout the race, Westphal made the decisive pass for the lead on Jack Hawksworth’s #14 Lexus RC F at Turn 10 with an hour to go.

Although recent BoP tweaks had seen the Ferrari granted more horsepower at the Charlotte Roval race one week ago, the team had not entered that GT-only race in order to focus on MacNeil’s ultimately successful efforts in this year’s Ferrari Challenge.

When Westphal delivered second on the grid for Petit Le Mans on Friday afternoon, it was clear the slight power hike had helped, but the team’s troubles weren’t yet over.

“We showed up with a car that had great pace over one lap but it was killing the rear tires,” he explained.

“Throughout each day, we made it better and better. We didn’t lose faith, we kind of just marched along and it really came alive in the race.”

It was Westphal’s third career IMSA win, the eighth for MacNeil and seventh for Balzan.

Said MacNeil: “This is one of the most difficult races in the world, even though it’s ‘only’ 10 hours. These two guys drove their asses off, phenomenal all weekend.

“The team worked super hard all weekend, the Scuderia Corsa WeatherTech guys – I can’t thank them enough. We rolled the car off the truck expecting a good car because we had a good car during the six-hour here. That wasn’t the case; we had to work hard at it.”

By finishing second, Aaron Telitz and Hawksworth – who shared their Lexus with Michael De Quesada – have taken the lead in the Teams’ points race. However, Telitz is two points ahead of Hawksworth in the Drivers’ points race, due to the fact that the pair haven’t been partners in the same AVS Lexus for the whole year.

Four points behind Telitz are Ryan Hardwick and Pat Long (Wright Motorsports) who finished fourth in PLM yesterday, accompanied by the highly impressive Jan Heylen, while MSR Acura’s Mario Farnbacher and Matt McMurry are only one point further adrift, despite being wiped out in the late stages of the race following a clash with the Heart of Racing Aston Martin. 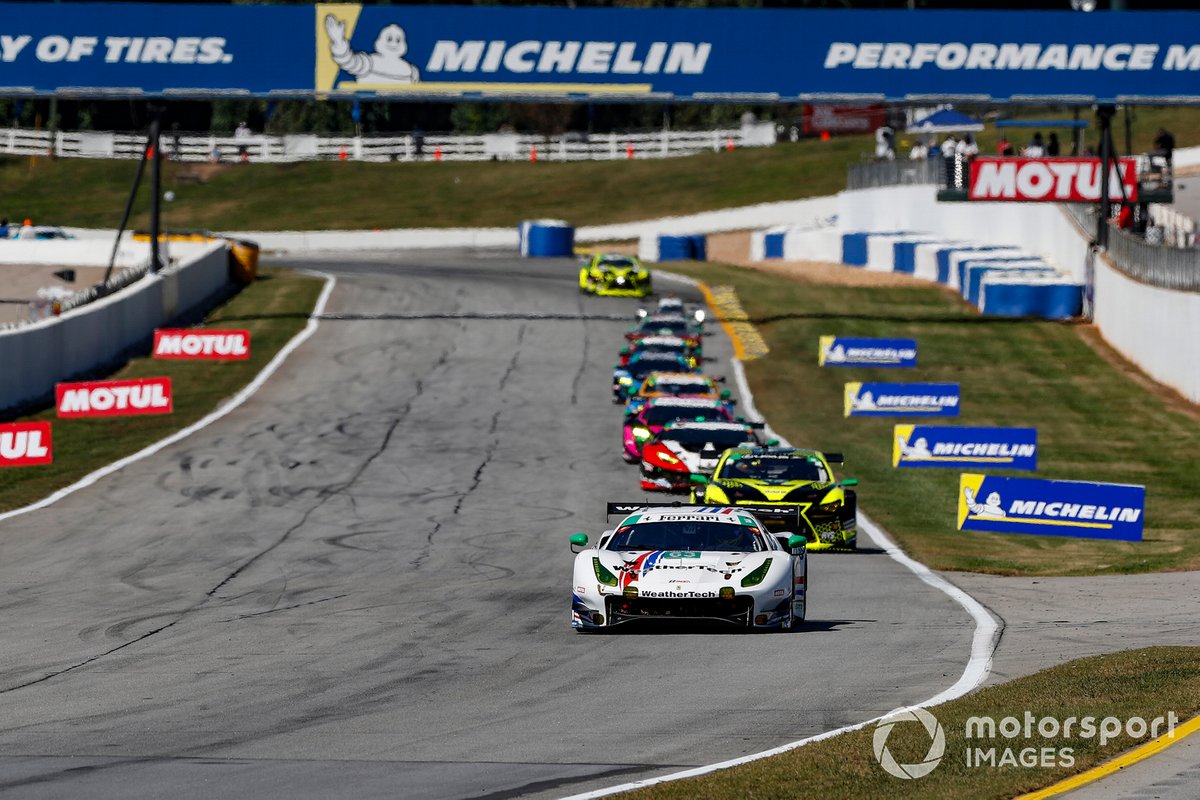