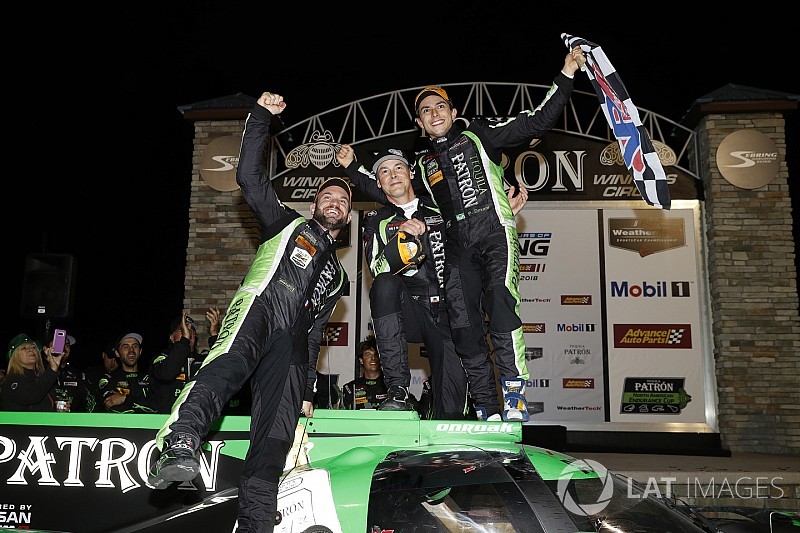 Despite a final stop that saw Derani stop a few inches short of the reach of ESM’s fuel hose, the squad triumphed convincingly, the Brazilian able to rocket away on cold tires on every restart.

The one possible threat might have come from Mazda Team Joest, who instead suffered a heartbreaking setback. Spencer Pigot had squeezed the #55 car between the heavily shunted Spirit of Daytona Cadillac of Tristan Vautier and the wall, and then survived a hit with the resultant debris.

However, the continuing need to push start the Mazda after pitstops in order to engage gear eventually caught up with the team. Pigot’s and Jonathan Bomarito’s co-driver Harry Tincknell had climbed to second place and was just six seconds behind Derani when all the leading Prototypes stopped 44 minutes from the end.

But on this occasion, the Mazda just wouldn’t engage its clutch for two minutes and by the time it got going, Tincknell was a lap down and in sixth place. The one satisfaction was that this was by far the most competitive showing for the RT24-P since its debut in Daytona over a year ago.

However, a late splash-n-dash for Di Resta left AXR clear to run to third, and also handed fourth place to the CORE autosport Oreca driven by Romain Dumas, Colin Braun and Jon Bennett. The United Autosports machine resumed in fifth as the final entry on the lead lap.

Behind Tincknell, the #99 JDC Miller ‘Red Dragon’ Oreca clocked seventh, albeit six laps off the lead.

Over the final couple hours, GT Le Mans became a shootout between the #911 Porsche 911 RSR of Nick Tandy/Patrick Pilet/Frederick Makowiecki and the BMW M8 of Alexander Sims/Connor De Phillippi/Bill Auberlen, eventually being resolved in Tandy’s favor by 6.2sec over Sims.

Oliver Gavin, Tommy Milner and Marcel Fassler were sixth in the #4 Corvette C7.R.

Bryan Sellers pulled off a strong move around the outside of the recently pitted Jeroen Bleekemolen to hit the front of the GT Daytona class with less than hour to go.

His Paul Miller Racing Lamborghini Huracan, which he shares with Madison Snow and Corey Lewis, then pulled away to clinch victory by 8.169sec.

The Bleekemolen/Ben Keating/Luca Stolz Riley Mercedes AMG GT then spent the final stages trying to hold off Alessandro Balzan in the Scuderia Corsa Ferrari, which had survived a last-hour assault by JDC Miller’s wayward #85 Oreca Prototype in the hands of Robert Alon.

Bleekemolen blinked five minutes from the end, however, surrendering second to Balzan and falling two seconds back.