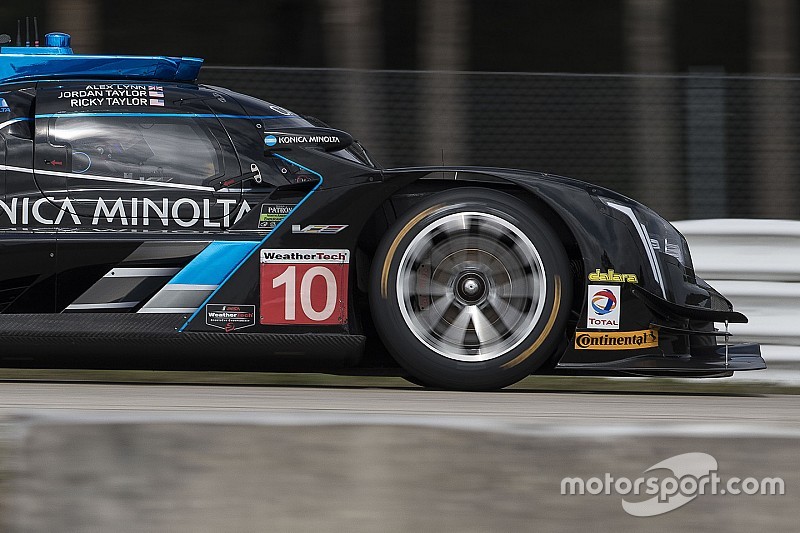 Balance of Performance mods have blunted the fangs of the Cadillac DPi-V.Rs but they still have serious bite, as Wayne Taylor Racing and Action Express Racing dominated the times during second practice for the 65th 12 Hours of Sebring.

The Action Express Cadillacs of first Mike Conway and then Joao Barbosa hit the top of the Prototype times, despite Albuquerque briefly suffering a broken throttle.

However, this pair were shoved aside by the similar Wayne Taylor Racing Caddy as Jordan Taylor became the first and only driver in this session to crack the 1min50sec barrier, ringing up a 1m49.888s.

That put him 0.215 ahead of Barbosa’s best in the #5 car, and almost half a second clear of Conway’s time in the entry of reigning champions Dane Cameron/Eric Curran.

Reigning WEC champion Neel Jani eventually whittled the Rebellion Racing Oreca’s deficit down to seven tenths of a second, with Tristan Nunez in the #55 Mazda a further 0.7sec behind. Brendon Hartley spun the #22 Extreme Speed Motorsport Nissan-Ligier in the closing minutes and wound up sixth.

GT Le Mans saw Corvette Racing back where it belongs, the defending Sebring winner Tommy Milner putting the #4 at the top, and Antonio Garcia grabbing third. The yellow pair were split by last week’s St. Petersburg IndyCar winner Sebastien Bourdais in the #66 Ford GT which was less than two-tenths off top spot.

Patrick Pilet drove his #911 Porsche 911 RSR to fourth, just ahead of Giancarlo Fisichella’s best in the Risi Competizione Ferrari 488, and the other two Fords of Stefan Mucke and Scott Dixon.

GT Daytona continued to see the Audi R8 LMS machines of Stevenson Motorsports and Land-Motorsport looking strong, with Andrew Davis putting the #57 car some 0.2sec clear at the head of the charts. However, this time the R8s were split by a superlative effort from Austin Cindric in the #15 Lexus RC F of 3GT Racing. Behind Christopher Mies in the Land-Motorsport car was Patrick Lindsey in the Park Place Motorsport Porsche 911 GT3 R, Spencer Pumpelly in Alegra Motorsport’s similar Porsche and Sage Karam in the second Lexus.