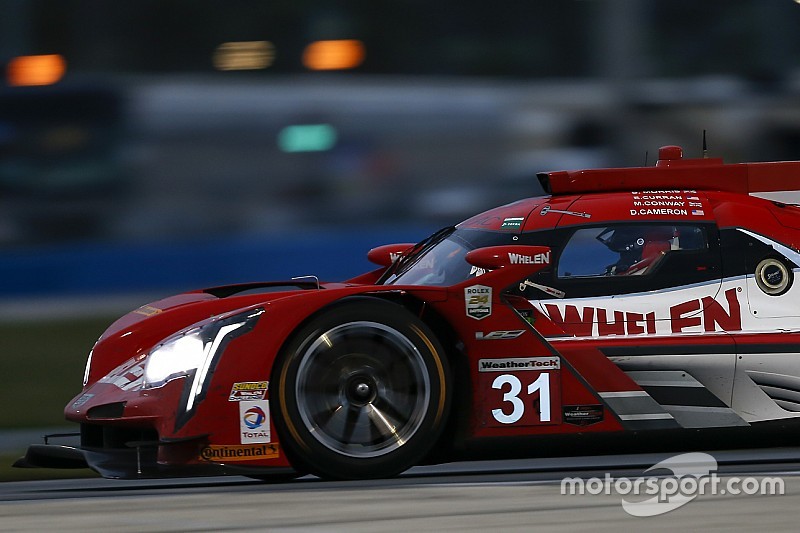 Johannes van Overbeek in the ESM Ligier Nissan led the session after half an hour, until Christian Fittipaldi’s #5 Action Express Cadillac became the first car into the 1min50sec segment, with Alex Lynn then grabbing third for Wayne Taylor Racing, Nick Heidfeld fourth in the Rebellion Racing Oreca and fifth going to Tom Kimber-Smith’s #52 PR1/Mathiasen Motorsport Ligier.

Jordan Taylor then put the WTR Cadillac at the top by almost half a second on the car’s 16th lap, before Conway cut a further 0.3sec from that benchmark time. That 1min49.815sec lap of the 3.74-mile course for the #31 AXR Caddy would remain the only one that breached the 1min50sec barrier, although Ricky Taylor would eventually draw to within 0.26sec.

The #2 ESM Ligier Nissan, which had missed the opening two practice sessions with an unspecified problem, emerged at last and Pipo Derani wasted no time in cutting a lap just 0.07sec slower than teammate van Overbeek’s best, the pair of them finishing the session sixth and seventh.

The manufacturer battle in GT Le Mans appears as fascinating at Sebring as it was at Daytona back in January’s Rolex 24 Hours. Sebastien Bourdais’ best effort put the #66 Ford GT top, with Laurens Vanthoor giving further evidence of his worth to the Porsche works team, just 0.25sec slower in the 911 RSR. Olivier Pla and Scott Dixon were third and fourth in the other two Fords, with Dirk Werner fifth in the second Porsche.

James Calado was sixth quickest in Risi Competizione's Ferrari 488, with Oliver Gavin seventh in the fastest of the two Corvette C7.Rs, albeit 1sec off Bourdais’ best.

In GT Daytona, Stevenson Motorsports’ #57 Audi R8 LMS caused a red flag when it ran out of fuel on track, as the team tested just how far it could get on a tank of gas. However, Lawson Aschenbach moved it to the top of the times, and as per this afternoon's sessions, its nearest challengers were the 3GT Racing Lexus RC F of Jack Hawksworth and the Land-Motorsport Audi piloted by Connor De Phillippi.

Tristan Vautier was fourth in the #75 SunEnergy1 Racing Mercedes ahead of Bryan Sellers in the Paul Miller Racing Lamborghini Huracan and Townsend Bell in the Alex Job Racing Audi R8.

The Prototype Challenge class looked reasonably interesting with Gustavo Yucaman top in the #26 BAR1 Motorsports entry about a quarter-second ahead of Sean Rayhall in the Starworks entry.