Felipe Nasr led the Sebring 12 Hours after the second hour of the event in his Action Express-run Cadillac DPi, following a wild start to the race that saw the front row starters collide and a Ferrari on its roof.

There was drama right from the green, as pole man Tristan Vautier and Olivier Pla collided at Turn 1, sending Pla sliding off into the grass. He rejoined but would pit immediately and the ESM team retired the Nissan DPi citing too much damage to fix in time.

Also in trouble was the #4 Corvette of Tommy Milner, which sustained a left-rear puncture, and the GTD pole-sitting Ferrari of Daniel Serra also got a puncture after a clash with the #15 Lexus of Jack Hawksworth.

Vautier’s Spirit of Daytona Cadillac led Ricky Taylor (Penske-Acura) and Nasr (Action Express Cadillac) in the early going, before the race’s first full-course yellow that was required when Sebastian Saavedra spun his Ligier at the final corner, and the following Frankie Montecalvo hit him and flipped over his Ferrari 488 against the tirewall. 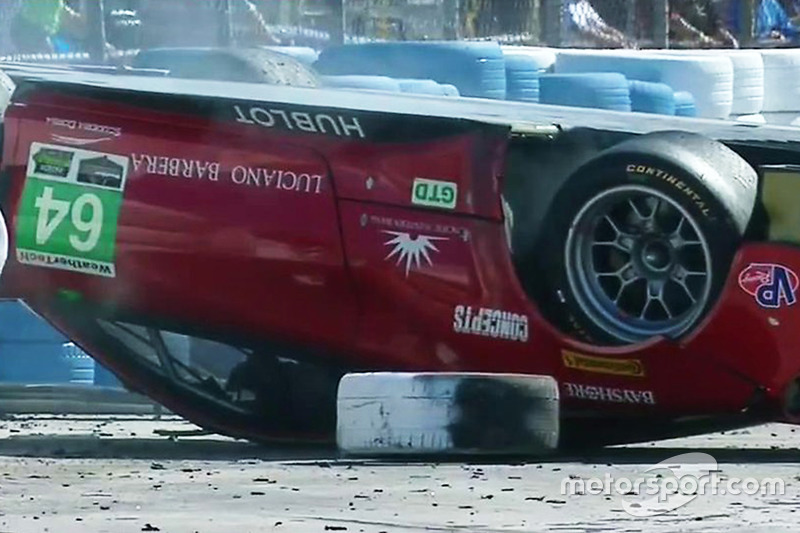 After the ensuing first round of pitstops, Taylor rejoined in the lead from Nasr, with Vautier dropping to third. Vautier lost another two places in the second stint, with Pipo Derani (ESM Nissan) and Filipe Albuquerque (Action Express Cadillac) both getting past him.

At the second round of stops in hour two, Nasr took over at the front – undercutting ahead of Taylor by pitting earlier. Johannes van Overbeek was running third, after taking over from Derani in the ESM Nissan. Vautier moved back to fourth, with Renger van der Zande moving up to fifth in Wayne Taylor Racing’s Caddy.

BMW held an early 1-2 in GT Le Mans, with Jesse Krohn out front in the #24 car, but his tail gunner Connor de Phillippi slumped back to eighth from second in the #25 sister car after the first round of pitstops.

The chasing Ford GT challenge almost expired in comic fashion when Joey Hand and Richard Westbrook collided exiting their pit boxes after the first round of stops, but they run second and third in class, ahead of the Risi Ferrari and two works Porsches.

Corvette’s dreadful start to the race was compounded when the #3 car went behind the wall in the second hour.

David Heinemeier Hansson took over the leading GT Daytona Lexus from Hawksworth, with Sheldon van der Linde running second in the #29 Audi, ahead of Corey Lewis in the #48 Lamborghini.

Nasr returns to IMSA action after recovery from COVID-19