The result marks the best qualifying effort in the event for the 2010 Rolex 24 At Daytona winning team.

Daytona Beach, Fla. – Action Express Racing kicked off the 2014 IMSA TUDOR United SportsCar Championship in strong fashion on Thursday as the North Carolina-based team qualified on the second row for the 52nd running of the historic Rolex 24 At Daytona. Christian Fittipaldi set the third quickest time of the 15-minute session in the No. 5 Action Express Racing Corvette with a time of 1:38.658-seconds while Burt Frisselle wheeled the No. 9 Action Express Racing/Millennium Corvette DP to a quick lap of 1:38.838-seconds for fourth place on the grid for the 24-hour endurance race. 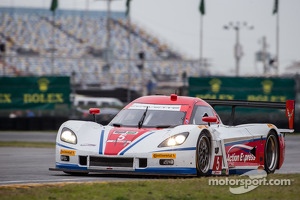 The result marks the best qualifying effort in the event for the 2010 Rolex 24 At Daytona winning team.

“Our strategy has always been to qualify our race setup and we are pretty comfortable with today’s results,” said Team Manager Gary Nelson. “Once we figure out this racing thing we will go for poles, but right now we are using every tool we have to try and get our best race setup under the car and we are feeling pretty good about it.”

Action Express Racing team members worked over 12,000 hours during the off-season to prepare the cars for the new TUDOR Championship and that big effort was on full display when not only was the squad the first prototype team ready to test at Sebring in November, the team topped the speed charts in the very first test session of the Roar Before the 24. Continuing this trend, Fittipaldi was the first to set a competitive lap-time in Thursday’s qualifying and was followed closely by Burt Frisselle who posted the second quickest time early on in the session. As the session played out, the duo ultimately took third and fourth at the checkered flag to nab two solid starting positions in what is expected to be a highly competitive event.

Fittipaldi will open the 24-hour endurance classic and will share the No. 5 Corvette DP with teammates Joao Barbosa and Sebastien Bourdais.

“This was definitely a great result for the team to achieve our best qualifying here in Daytona,” offered Fittipaldi. “But we are focusing mostly on the race here. Obviously it is nice to start up front, but I am mostly thinking and focusing on the race and I think Sebastien (Bourdais) and Joao (Barbosa) feel the same. We are definitely trying to figure out just what we have to do during those last four hours of the race during crunch time. Both cars are in the top-five, it has been a solid effort from the team and now we just have 24-hours ahead of us.”

Burt and Brian Frisselle will each make their 10th Rolex 24 starts on Saturday and the pair co-drives the No. 9 Action Express Racing/Millennium Corvette DP with Delta-ADR racers Fabien Giroix and John Martin. The foursome has shown strong pace all weekend long in what has proven to be a great partnership between Action Express Racing and Great Britain’s Delta-ADR.

“Two cars on the second row to start the Rolex 24 is awesome, you definitely can’t be disappointed with that,” said Burt Frisselle. “But, we know that this race isn’t really about where you start, it’s a 24-hour event. But it’s really nice for the team to see that. When everyone is throwing down all they have, we have the speed to be in the top-five which shows us that on Sunday afternoon when it comes time to race for the win, we have the speed to do that. We are definitely going to work on balance for the race. We are going to try and get the car as comfortable as possible for long stints. But I am just happy for all of the Action Express guys who worked harder than anybody in this off-season to be prepared for this event. With the testing and all of the hours they have put in, to have the team starting both cars on the second row for the new TUDOR United SportsCar Championship premiere event is pretty exciting and I’m just really proud to be a part of it.”

Action Express Racing revs up for Rolex 24 at Daytona