Raphael Matos pushed the No. 38 Dash Neighborhoods/Phillips 66 machine to its limits while qualifying for the second round of the TUDOR United SportsCar Championship.

Raphael Matos pushed the No. 38 Dash Neighborhoods/Phillips 66 machine to its limits while qualifying for the second round of the TUDOR United SportsCar Championship. Matos zeroed in on landing the pole after running at the top of the PC class throughout practice. With clean, precise laps it looked like he would hit his mark, but in the last minutes of the session, Matos was bumped to the third position, 17th overall. 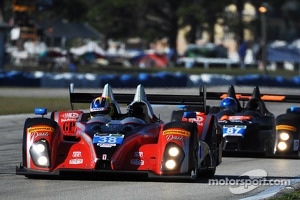 A best lap time of 1:55.603 left Matos happy with the team's effort but slightly shocked at the result.

"I don't think qualifying means a whole lot for us," Matos said. "But it is always nice to start out up front. I was very surprised with the difference to P1. I was hoping to be a little closer to Bruno (Junqueira). I think the team did a great job preparing the car. I'm very happy with the result. Third place is not bad, and we're up front. We have a long day ahead of us tomorrow, and we have a strong car for the race."

"It's a good starting spot," O'Neill said. "We worked on some speed today, and we thought we had a chance at the pole. It's pretty amazing that one car can be eight-tenths quicker than the next two cars that are within one-tenth of each other. I think we're good for the race and have a solid car. Rafa did an awesome job qualifying for us, fighting for the pole. We'll go into the race and we'll push for 12 hours."

Starting positions set for Dempsey Racing at 12 Hours of Sebring