The No. 93 SRT Viper GTS-R team qualified third in class with a time of 1:44.617 with driver Jonathan Bomarito behind the wheel at Florida's Daytona International Speedway.

DAYTONA BEACH, Fla. (Jan. 23, 2014) - The SRT® (Street and Racing Technology) Motorsports driver Marc Goossens captured the GTLM class pole for Saturday's 52nd running of the Rolex 24 At Daytona with a fast lap of 1:44.506 in the No. 91 Viper in Thursday's qualifying session. 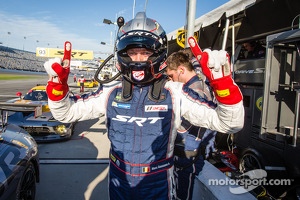 Close behind Goossens, fellow SRT driver Jonathan Bomarito was the third-fastest GTLM entry in qualifying with a quick lap of 1:44.617. By virtue of qualifying first and third, the SRT Motorsports Viper GTS-Rs will start nose-to-tail on the inside row for the 2014 edition of the endurance race.

Following Thursday's qualifying session and trio of practice periods, the team will return to the track for a final, 60-minute practice session on Friday at 11:30 a.m. EST before the Rolex 24 At Daytona begins on Saturday at 2:10 p.m. EST.

How did it feel to capture the GTLM pole for the first race of the United SportsCar Championship? Marc Goossens, driver, No. 91 SRT Viper GTS-R: "The car felt good all day long and we've been working both on speed and trying to make the car easier in traffic, which we tried in the earlier sessions. 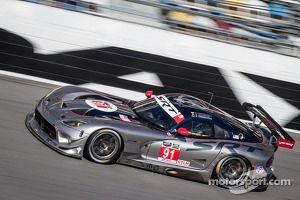 It's always hard to find out what the others have up their sleeve for qualifying, but we kind of knew early on we had a good car. We didn't know if it was good enough to be third or first. We were on a good run at the end of last year and we carried that into this year and our team has only gotten stronger in all different areas and it's just awesome to be here with SRT Motorsports on pole for the first race of the year. There's no better way to start the season! It was a good run by the 93 (Jonathan Bomarito) too and you can tell it's very close in GT and it could go any way. Having the pole is not the most important thing for a 24-hour race, but it helps - it boosts the confidence for the whole team. I think it's a good starting point to get a good first 24-hour race."

What does this say about your team? Marc Goossens, driver, No. 91 SRT Viper GTS-R: "We've come a long way within, let's say a year and a half, with this program. The 24 Hours of Daytona is always a special event and to start the new championship, the new year, with a pole position is something that we're all proud of and the credit goes to the whole team. It's not just the driver who is behind the wheel for that fast lap. But now we have to carry that whole spirit into the race and be there on Sunday afternoon."

How was the team's qualifying effort? Jonathan Bomarito, driver, No. 93 SRT Viper GTS-R: "I think everybody with Team SRT is very happy to be starting this year's 24 first and third on the grid. Qualifying is great for the team and the guys and provides momentum going forward for the race. It gives you that little extra pump of adrenaline and energy and optimism. It's a long race in the end. Qualifying doesn't mean a whole lot for a 24-hour race other than the inside and momentum for the guys."

Did you enjoy the visit to the Halifax Speediatrics unit on Wednesday? Dominik Farnbacher, driver, No. 91 SRT Viper GTS-R: "It was good to work together with the Austin Hatcher Foundation at the Halifax hospital. It was good to see those little kids smile when we worked on those pinewood cars together. It really feels good to take some time and hang out with those kids. We had quite a lot of fun crashing the pinewood cars on the ramp. Eric reminded me of myself because I was always trying to crash the cars, so he was more or less a little reflection of myself."

Has the car improved since the Roar? Ryan Hunter-Reay, driver, No. 91 SRT Viper GTS-R: "Knowing how hard these guys have worked since the test and how good the car was at the test, we've definitely made it better. I'm just really proud of the team for putting it there. Qualifying is not the end all be all for a 24-hour race, but certainly it's indicative of all the hard work we've put in and, hopefully, of the pace to come in the race. I'm just really happy to be here with SRT with this driver line-up and really proud of Marc. Marc's still the quickest guy out there after all these years."

Was the evening practice productive for the team? Kuno Wittmer, driver, No. 93 SRT Viper GTS-R: "I think it went well. The car is really good. It's very good driving at night with the Viper. You can see very well at night. The car has good lights on it. Not anything out of the ordinary tonight and I think we have a very good package. Coming from qualifying, we have a very good package for the race. The car is consistent and very good on and off our line, so we should be pretty nice. Driving at night is always something that's different for the driver compared to the nighttime. It's definitely a period of adjustment for the eyes, you have to get your brain adjusted too and just recognize your reference points when you're on track. I think we've got the right package right now."

What are your thoughts on the team's qualifying performance? Rob Bell, driver, No. 93 SRT Viper GTS-R: "It's great to start the year with a pole, isn't it? They both (Marc Goossens and Jonathan Bomarito) did a great job. It was close between the top four or five cars, so Marc did a great job to pull it out with some really serious company here."

What does this pole mean for the team? Rob Bell, driver, No. 93 SRT Viper GTS-R: "It's more a statement of intent really. In a 24-hour race, yeah it doesn't really matter, but we all want the pole and anybody who says they don't is lying. It means the car has come a long way and we're near where we want to be and this bodes well for the rest of the year. It gives everyone a pat on the back for the hard work during the winter and a bit of confidence."

How important is this pole for SRT Motorsports? Ralph Gilles, president and CEO of SRT: "It's a great accomplishment to come down to Daytona and take the pole for this historic event and the first race for the new series. It speaks to the development of this SRT Motorsports team in just a few short years and shows where we're headed. It took a lot of work to get to this point and we have great momentum moving forward. But we also know this is a 24-hour race that isn't won on the first lap, so we certainly still have work ahead of us to be successful in this endurance race."

What did you think or your team's performance in qualifying? Bill Riley, lead engineer, No. 91 SRT Viper GTS-R: "It was really good to get the No. 91 on the pole and get the No. 93 Viper GTS-R up there. It gives us a lot of momentum going into the race. We kept the drivers in the car all day to work on setup. We tuned the car and worked really hard between the Roar and now to improve the cars and we did with setup and different changes. The guys really haven't had a day off since we left Daytona, or left Petit (Le Mans) for that matter. It's really good to have it all pay off. Now we just have to put our heads down and work on execution and hopefully have a nice, clean race and go from there. Right now, it really couldn't be better."

How pleased are you with your team's qualifying session? Matt Bejnarowicz, lead engineer, No. 93 SRT Viper GTS-R: "I don't think it could get any better than that, honestly. We'll be the first two teams in our column, so they can work as a team and work the first part of the race to get a good start. Couldn't have planned it better if I was trying."

Does the qualifying result speak to the growth of the SRT Motorsports program? Matt Bejnarowicz, lead engineer, No. 93 SRT Viper GTS-R: "It's pretty incredible. It really just speaks to the people behind it. The team has been working their butt off. They've had about two days off since the end of last season. I'm really happy for them because it's justification for all their hard work to put the cars in front. The drivers, the crew, the engineering staff - everybody has just been pulling together and they're all working on the same mission. I'm really just happy for the whole team."

How was today's qualifying effort? Gary Johnson, SRT racing manager: "Fantastic job by the entire SRT Motorsports team. Marc (Goossens) really put down a great lap and we were trying to get the top-two positions, but we just missed that. Overall, we're really looking forward to the race. It's going to be 24 hours of struggle of course, but I think we've obviously got a great chance for a win."

What are you doing this weekend?