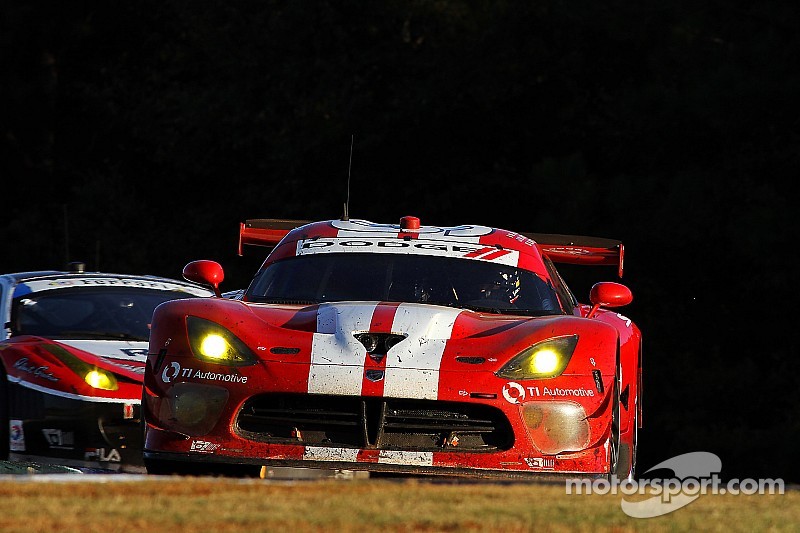 Driver and team championships for the crew.

Kuno Wittmer captured the IMSA TUDOR Championship GTLM driver championship with a third-place finish at Petit with co-drivers Marc Goossens and Ryan Hunter-Reay in the No. 91 Dodge Viper GTS-R. The team's sister No. 93 Dodge Viper GTS-R in turn captured team honors after being driven this year by Wittmer, as well as Jonathan Bomarito, Dominik Farnbacher and Rob Bell, the trio that sealed the title with a sixth-place finish Saturday.

Taking over from starting driver Wittmer, Goossens moved the No. 91 Viper into the lead late in the race's second hour. Along with Bell, the drivers stayed in lead-pack contention for the majority of the remainder of the race and were no lower than third in the final four hours to the finish.

The No. 93 team ran as high as third in the middle stages of the race but Bomarito, Farnbacher and Bell ultimately slowed their pace to conserve a gearbox that was operating at high temperatures. The team tried to repair the problem with more than one extended pit stop and also lost time when a faulty air tank only allowed three-of-four tires to be changed in a later pit stop.

Despite the setbacks, the No. 93 Viper earned more GTLM points than any other team this season that, along with Wittmer's driver title, gave SRT Motorsports two-of-three championships contested in the class. SRT finished second in the GTLM manufacturer championship.

Next up for SRT Motorsports is the season-ending TUDOR Night of Champions awards celebration at Cipriani 42nd Street in New York on Monday, Oct. 13.

How does it feel to be a champion?

"This is the first press release as a champion, right? I don't know how I feel. It hasn't really kicked in yet, but I've just been balling my eyes out for the last half hour or so. I couldn't have done this without any of the other people on this team. I have five of the best teammates in the world - the best drivers in this paddock. The crew is extraordinary. They really show that they are a championship caliber team and they deserve all the credit, not me. They deserve the credit. The car was amazing. Everything was awesome. I'm just a little emotionally bummed that I can't share this with Jonathan Bomarito. We were together all year and the fact that we can't share it is a bummer. In my heart, he's a champion as well."

How was today's race?

"The race was really tough. There was a lot of adversity on track, a lot of contact with other cars and people running into each other, but we stayed very clean. We didn't hit anybody. We had no contact with the car and no damage. It was just about being clean and having perfect pit stops. Engineering did a great job. They didn't even touch the car during the race. It was just tire pressure - that's all we adjusted is pressure, which speaks to how good the car was today. Here we are, you know? I think I must have ripped off all my finger nails with 10 laps to go."