Nick Tandy and Patrick Pilet won the GT-only round of the IMSA WeatherTech SportsCar Championship at Virginia International Raceway, winning a tense duel with the sister works Porsche of Laurens Vanthoor and Earl Bamber.

From pole position, Vanthoor led into Turn 1 with the #911 Porsche of Tandy sprinting from sixth to second thanks to a brave lunge around the outside of the #3 Corvette and both Ford GTs at the first corner.

The first caution period occurred 10 minutes into the race, after the #96 BMW of Robby Foley hit the #48 Lamborghini of Corey Lewis, and a tire carcass came off the M6 after the collision. That sent all the GTLM runners into the pits, where the #911 (Tandy/Pilet) jumped ahead of the #912 despite making a driver change.

The #4 Corvette of Oliver Gavin also rejoined ahead of both Fords in fourth, leading to a Porsche-Porsche, Corvette-Corvette, Ford-Ford and BMW-BMW running order at the restart. A brief off from Gavin gifted fourth to Joey Hand’s #66 Ford, and Ryan Briscoe later demoted Gavin a place further in the #67 sister GT to restore the status quo from the opening stint.

The #912 retook the lead in the second round of pitstops at half distance, with Bamber taking over from Vanthoor and Tandy returning to the #911 car after Pilet’s single stint.

Although he was 4s in arrears for a while, Tandy closed the gap before his final stop and then put in an almighty charge after it. When Bamber pitted for his last splash of gas, he rejoined behind Tandy.

A second full-course yellow happened with 20 minutes to go, when Katherine Legge suffered a huge crash at Turn 9, thought to be a tire failure, smashing her Acura NSX into the tire wall – fortunately without injury. Officials scrambled to repair the barriers to get the race restarted, and did a fine job in time for a sprint to the finish.

Tandy got the jump on Bamber at the green flag with eight minutes remaining, but Bamber attacked hard as the clock ticked down to zero. He got the gap under three tenths of a second before Tandy responded, pulling away to a 0.7s win.

“It’s fun when you’re behind, when you’re in front you’d like a team order,” quipped Tandy of Porsche allowing its cars to race to the finish. “The team lets us race, it’s amazing. To comeback with such a strong Sunday after a bad Saturday, it says a lot.”

The battle for third was effectively settled straight after the final pitstop, as although Antonio Garcia (in for Magnussen) beat Dirk Muller (in for Hand) off pitlane, Garcia locked up and ran wide at Turn 1, allowing the Ford past. In his efforts to fight back, Garcia punted Muller into a spin at the Roller Coaster.

This allowed the second Corvette, the #4 of Tommy Milner (in for Gavin), on to Muller’s tail, as the stewards decided to give no penalty for the collision – presumably as Muller had thrown a major block on the preceding straight. As Garcia held third, Milner passed Muller, the latter also being jumped by a late-stopping Richard Westbrook (in for Briscoe) in the second Ford.

The RLL-run BMW M8s rounded out the GTLM field, having struggled to get on terms for pace all weekend. 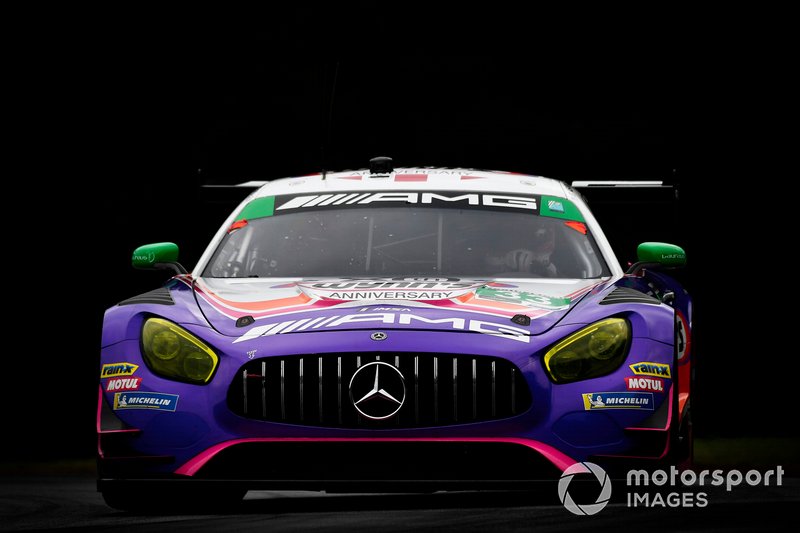 In GT Daytona, pole winner Zacharie Robichon’s Pfaff Porsche 911 led Trent Hindman (Meyer Shank Acura NSX) and Richard Heistand (AIM Vasser Sullivan Lexus RC F), as the sister #12 Lexus of Frankie Montecalvo lost ground by running wide at Turn 1, and then took a rough ride through the Esses that sent him to the pits in the opening five minutes.

Unlike his rivals, Robichon didn’t pit during the first yellow and stopped under green so teammate Hargrove was able to maximise his drive time for the final 105 minutes.

Jack Hawksworth, in for Heistand in the #14 Lexus, grabbed the lead from Hargrove just after the halfway point, making a robust pass into Turn 1. But an electrical issue caused Hawksworth to pit repeatedly, and despite a battery change, the car plunged to last place and, ultimately, retirement.

That meant the battle between Hargrove and Jeroen Bleekemolen, sharing the #33 Riley-run Mercedes with Ben Keating, became key. Following their last pitstops in the final hour, the pair battled hard, with Bleekemolen – on warmer tires having pitted earlier – outdragging Hargrove on the back straight.

Bleekemolen quickly overcame the earlier-stopping Acura of Mario Farnbacher (in for Hindman) to grab the class lead. He kept his cool at the late-race restart too, despite a late scare over some tire pick-up that took time to clear up, winning by 0.6s over Hindman/Farnbacher.

Toni Vilander – sharing the WeatherTech Ferrari with Cooper MacNeil – passed the Robichon/Hargrove Porsche for third in the closing stages.