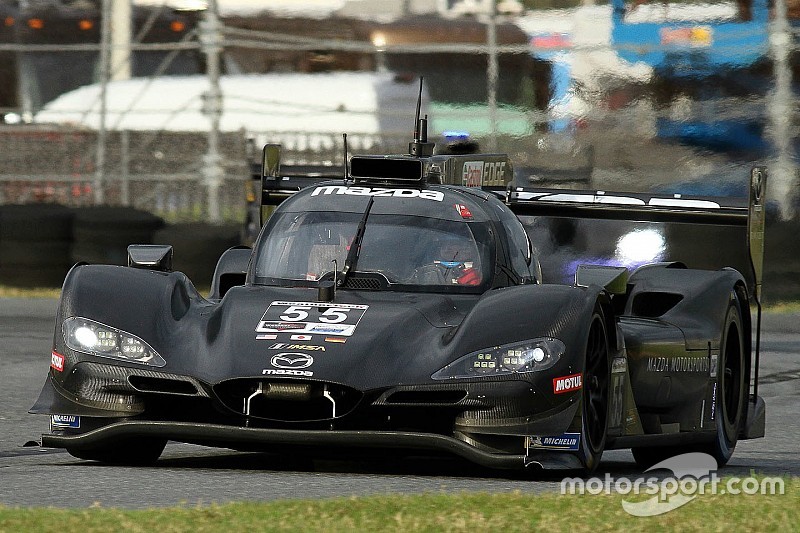 Mazda Team Joest’s Harry Tincknell set the top time of the third session of the Roar Before the Rolex 24, but Fernando Alonso was just 0.127sec behind in the Wayne Taylor Racing Cadillac.

Tincknell sent the #55 Mazda RT24-P below the 95-second bracket, setting a 1min34.925sec on only his fourth lap of the day in the IMSA WeatherTech SportsCar Championship's official test before the Rolex 24 at Daytona.

However, late in the session, Alonso took over the WTR Cadillac DPi-V.R from team regular Jordan Taylor and whittled the car’s best time down to 1min35.052sec, half a second quicker than the #77 Mazda piloted by Oliver Jarvis.

Alexander Rossi edged fellow IndyCar ace Simon Pagenaud by 0.012sec to be fastest Acura Team Penske driver albeit 1.25 from Tincknell’s best, while Devlin DeFrancesco was eighth in the faster of JDC-Miller Motorsports Cadillacs.

Mathieu Jaminet set the GT Le Mans pace in the #912 Porsche 911 RSR with a 1min43.862sec, but an excellent lap from reigning GTLM champion Antonio Garcia prevented a Porsche 1-2, Garcia lapping just 0.007sec slower in his Corvette C7.R, 0.122sec ahead of Frederic Makowiecki in the #911 car.

Miguel Molina slotted the Risi Competizione Ferrari 488 into fourth ahead of Richard Westbrook’s Ford GT and Philipp Eng in the faster of the two BMW M8s.

The nine-car GTLM field was covered by a mere 0.585sec.

In GT Daytona, Black Swan Racing’s Porsche 911 GT3 R was fastest in the hands of Matteo Cairoli, a mere 0.026sec quicker than AJ Allmendinger in the #86 Acura NSX of Meyer Shank Racing.

The Ferrari 488s of Spirit of Race, Scuderia Corsa and Via Italia were third, fourth and fifth, steered by Daniel Serra, Cooper MacNeil and Victor Franzoni respectively, while Mirko Bortolotti headed up the Lamborghini Huracan contingent for the Grasser Racing Team in sixth.