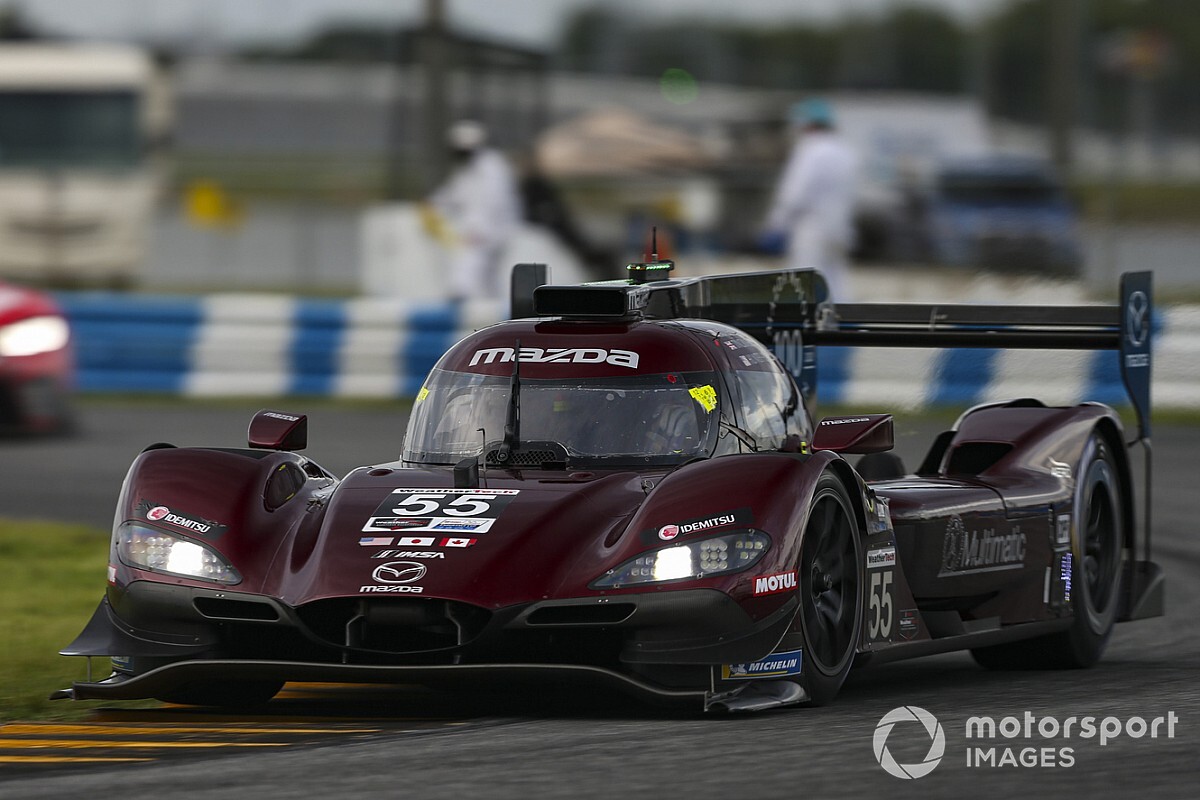 Mazda ace Harry Tincknell says that it was his “pleasure” to drive the #55 Mazda RT24-P as he believes he and co-driver Jonathan Bomarito had the car to beat in yesterday’s IMSA WeatherTech 240 at Daytona.

Last July, Bomarito, Tincknell and Olivier Pla scored the breakthrough IMSA WeatherTech SportsCar Championship win for Mazda’s prototype program and this was swiftly followed by triumphs for their teammates Oliver Jarvis and Tristan Nunez at Canadian Tire Motorsports Park, and then again for the #55 at Road America.

Yesterday’s victory at Daytona, which was only the second round of IMSA’s coronavirus-disrupted 2020 season, made it four wins in the last seven events for the RT24-Ps, and three of those wins have been 1-2 finishes. On this occasion, Tincknell led Jarvis by 10sec at the checkered flag.

The Cadillacs of Action Express Racing and Wayne Taylor Racing, ran slick tires on a damp track at the start of the race and therefore moved into the top two positions after 15minutes when the Mazda and Acura Team Penske drivers were obliged to duck into the pits to change from wet tires to slicks as the Daytona course dried. However, as the asphalt’s latent heat dispersed the last of the dampness from the racing line, the inherent pace advantage of the Mazdas saw them come to the fore again.

With the pole-sitting Acura of Helio Castroneves/Ricky Taylor retiring with mechanical difficulties and Juan Pablo Montoya and Dane Cameron apparently at a pace disadvantage – despite JPM’s strong effort in the early stages of the race – the Mazdas were able to dominate the second half of the 2hr40min race.

Tincknell said: “We knew from the first practice session that the car was fast. JB [Bomarito] had a great run in very difficult conditions at the start and kept his head really well. A few teams went off strategy by starting on slicks so it jumbled the race up a bit but once it went fully dry the Mazda was the car to have and JB put me in a fantastic position to go and win the race.

“From my side it was fairly relaxed – if you could ever call an IMSA race ‘relaxed’. The car was fantastic, the pit stops were great so I was the lucky one who had the pleasure of driving a fast car all the way to the flag.”

Tincknell admitted that the pitstops had been a concern beforehand, given the IMSA restrictions on the number of people tending to the cars. He and Bomarito, along with Jarvis and Nunez, therefore had to assist each other during driver swaps.

“The build up to this event was obviously tricky with the quarantine period and all the regulations in place,” Tincknell explained. “We knew with only 15 crew including drivers, we didn’t have enough for a pit-stop helper.

“We practiced it meticulously, and it worked absolutely fine. I had plenty of time to do my belts up after JB buckled me in. To be honest, it was like clockwork like most of the weekend. Literally a dream stop for everyone.”

Tincknell also paid tribute to the Multimatic Motorsports group, for whom this was the first win while in sole charge of the Mazdas, following Team Joest’s departure.

"All credit goes to the team who have been so busy dealing with the challenges of a global pandemic,” said Tincknell who has signed a long-term deal with the squad. “They have all made sacrifices to get us to this point, staying away from their families, and their efforts shouldn’t be underestimated.

“To take on a race program like this, with all the current restrictions, then come here and get a 1-2 result is outstanding and makes it all worthwhile. On a personal level I am delighted to take this win so soon after Multimatic announced I am here for the long haul!"