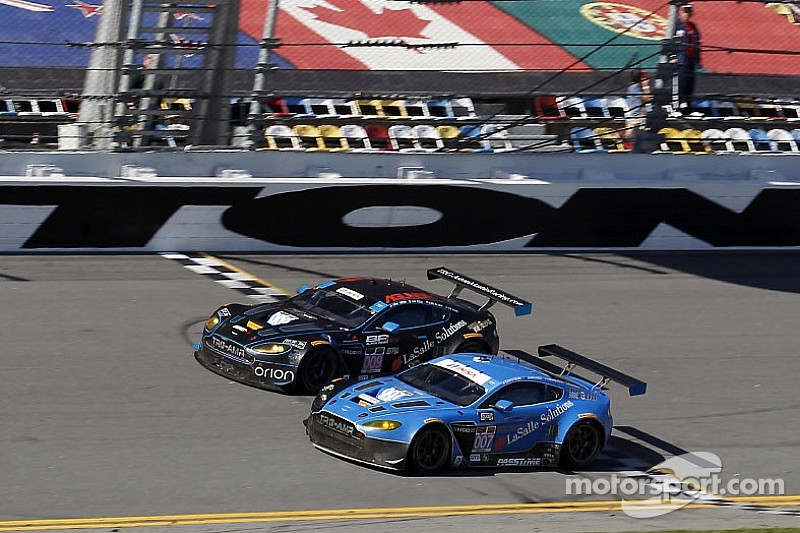 Both the 007 and 009 entries sponsored by LaSalle Solutions finished strong.

Petaluma, CA - TRG-Aston Martin Racing with LaSalle Solutions/Royal Purple/Orion Energy Systems/PassTime USA kicked off the 2015 major league sports car season with its 20th consecutive year of running at the Rolex 24 Hours at Daytona. Opening week could not have begun better as the 007 V12 Aston Martin Vantage GT3 with James Davison behind the wheel captured the coveted pole position in the highly competitive GTD Class.

Both the 007 and 009 entries sponsored by LaSalle Solutions finished strong but were unfortunately hampered by tough luck. Team owner Kevin Buckler viewed the overall weekend with mixed results, having seen tremendous success around the teams’ cutting edge marketing and partnership programs but encountering some unfortunate circumstances on the racetrack.

The race started off in fine fashion with both cars running strong. In the 007, James Davison handed the car off to Christina Nielsen, who put in a flawless double stint for her opening round before handing the car off to teammate Brandon Davis. Sitting comfortably on the lead lap, Davis was finishing his double stint about to hand the car off to Danish driver Christoffer Nygaard before catastrophe struck and the car was taken out of the race by a Ferrari reentering the racetrack after a spin.

The 007 would ultimately finish in P13 after an amazing effort by the crew and drivers to get the car on track and salvage as many championship points as possible. The 009 team of Riddle, Salazar, Deboer and Wilson did an outstanding job of driving clean, fast, and smart throughout the entire race. The team dealt with only a small electrical issue and finished strongly in P8 after 24 grueling hours.

Aside from the racing...

TRG-AMR used the historic event and facilities to help host what became one of the most engaging and exciting showcases of sponsorships, partnerships and true B2B relationship marketing ever inside the IMSA paddock. TRG-AMR welcomed their sponsors, executive staffs, decision makers, and other guests and influential VIP's to the track, filling the TRG-AMR hospitality suite and pit area to capacity and playing a big part of the overall weekend program.

Guests were escorted around the circuit throughout the entire 24 hours as they were shown the best vantage points from which to watch the 007 and 009 V12 Vantage GT3 racing machines, as well as to interact with all of the guests and other activities.

A huge part of the unfolding story involved the an in-depth media and marketing campaign with TRG-AMR’s team taking to Facebook, Twitter, Instagram, and Reddit in new ways never done before. In 2009, TRG was the first to ever live-stream footage and interviews from the pit box, conducting interviews and chat room discussions with the various drivers and guests throughout the entire 24 hours. With more than a few teams emulating the live stream program over the past years, Buckler decided it was time to do something different.

A userbase of over 300 million accounts

This time TRG-AMR turned to Reddit and its active userbase of over 300 million accounts, utilizing both a Live Feed updates page and a Reddit-only AMA. AMA stands for “Ask Me Anything” and the fans sure listened. Everything from driver lineups to questions about the team’s inner workings and even inquiries regarding the drivers’ eating and personal habits during such an intense race were on the table. All the fans seemed to enjoy the easy access to team information with more than 50,000 registered users viewing and/or engaging the Reddit activity pages throughout the 24-hour enduro.

Complementing the innovative marketing activities were the team’s typical utilization of traditional and social media channels. Leveraging Buckler’s long time relationship with McNeilly Communications and its managing partner George McNeilly, TRG-AMR’s efforts generated an enormous amount of buzz in the garage area and earned a slew of print, radio, and television appearances and mentions, including a front page story in the Orlando Sentinel by columnist George Diaz and a story in the works by New York Times technology writer Farhad Manjoo, who attended the race with a photographer.

Facebook, Twitter, and Instagram were filled with fantastic pictures and videos from inside the operations of the team and included some at-track produced video updates every six hours throughout the duration. All of the team's videos and other media related links are included further down this release.

Also of note were the number of news outlets who spent considerable time with Buckler, Davison, Wilson and Davis, along with fellow rising-star drivers including Christina Nielsen, Derek Deboer, Max Riddle and open wheel legend Eliseo Salazar, as well as many of the TRG-AMR sponsors.

As an added treat, sponsors and others who sought special guest experience packages, enjoyed an exclusive seven course Adobe Road wine dinner at the historic Halifax River Yacht Club. The wine pairing/dinner - hosted by Buckler and his wife Debra who also own Adobe Road Winery along with partner Kenneth Greenberg - was held in the private ballroom atop the yacht club overlooking the Halifax River with the opening reception held on a beautiful new 90-foot Viking sportfishing boat there at the dock.

Turner with resilient comeback in Rolex 24 at Daytona