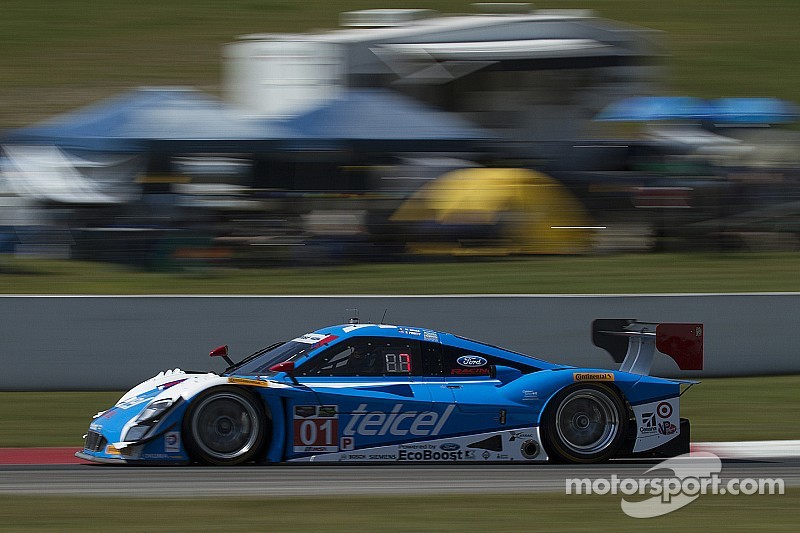 It was the third consecutive race in which the No. 01 entry did not finish.

Rojas spun in a Turn 2 puddle on his pre-race reconnaissance lap, sending the No. 01 machine into the tire barrier. The incident caused a great deal of damage to both front and rear of the car, forcing the team to miss the start of the race.

“It was wet in the morning, but the sun had come out before the race so we went out for the recon lap with dry tires,” explained Rojas. “As I left pit road the car started sliding into Turn 2, and just didn’t turn. It was like driving on ice. I hit the wall at very low speed. Unfortunately, the car was hurt bad enough they couldn’t fix it in time.”

The team finally made it on track just past the one-hour mark in the two-hour and 45-minute race, allowing both drivers to do a stint in the car and score championship points. They were scored ninth in the Prototype class and 36th overall.

It was the third consecutive race in which the No. 01 entry did not finish. The team took back-to-back victories earlier in the season in the Twelve Hours of Sebring and the Grand Prix of Long Beach.

The race at Canadian Tire Motorsport Park provided a bright spot in a difficult debut season for the No. 07 SpeedSource Mazda Prototype team. The car shared by Joel Miller and Tristan Nunez ran as high as sixth until its final pit stop with approximately 45 minutes remaining.

The final pit stop dropped them to eighth, which is where they finished, but it was the first overall top-10 result for Miller and Nunez. It was the second top 10 of the season for the team, as owner Sylvain Tremblay and co-driver Tom Long finished a season-best seventh at Mazda Raceway Laguna Seca in May.

The win in today’s race in the GT Le Mans (GTLM) class was the first at Canadian Tire Motorsport Park for the Chevrolet Corvette C7.R, but the new car carried on a winning tradition established by two previous Corvette models. The Corvette C6.R claimed six wins at the track formerly known as Mosport between 2005 and 2013 and the older Corvette C5-R model won four races from 2000 through 2004.

The team now has 11 victories in 14 races since 2000. It also now has 23 podiums and five pole positions over the same period. No. 3 Corvette driver Antonio Garcia could not put his finger on a reason why the team has had such success.

"I don't know, but we end up winning,” he said. Last year and this year, it was really close between us and the Viper. During the first stint, we were bumper-to-bumper. During the second one, I went out with a little bit of a lead – like three seconds. The most it went was eight seconds because of traffic.

“Everything ran perfect. The Corvette Racing team did a perfect job everywhere, in every single situation."